By: RVBusiness|Published on: May 23, 2018|Categories: Today’s Industry News| 0 comments 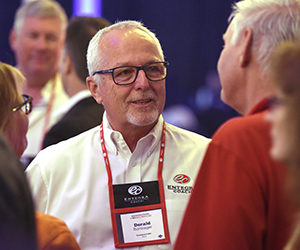 With more than 200 motorhomes and 500-plus people in attendance, the 2018 Entegra Coach Homecoming is underway at the Elkhart County Fairgrounds in Goshen, Ind. The event, which includes several seminars as part of the Entegra Coach Academy, runs from May 21-24 and is exclusive to the Entegra Coach Owners Association (ECOA). (To view a slideshow scroll to the right side of the RVBUSINESS.com home page. Photos by J. Tyler Klassen).

Several management executives of Jayco Inc. and its Entegra Coach division were on hand Tuesday night (May 22) for a cruise boat-themed dinner to provide a standing room-only audience with the latest developments at Entegra Coach, a Middlebury, Ind.-based manufacturer of high-end diesel and gas Class A and C motorhomes.

“We have 208 coaches here at the fairgrounds this year,” Wilbur Bontrager, chairman of Thor Industries Inc. subsidiary Jayco, told RVBUSINESS.com. “They have been taking test drives today. They will be taking plant tours tomorrow. We also have listening sessions scheduled to hear suggestions and opportunities from our customers.”

During the formal presentations, Derald Bontrager, president and CEO of Jayco, noted the company is  “taking great pride” in celebrating its 50th anniversary this year.

“Who would have dreamt that we would be here today building upwards of 70,000 RVs each year with over 4,000 employees?” Bontrager said. “But I like to tell our people that bigger is not always better. What really matters is the person buying a popup camper or a Cornerstone (top-of the line diesel pusher) is making an investment in our company because they believe in us.” 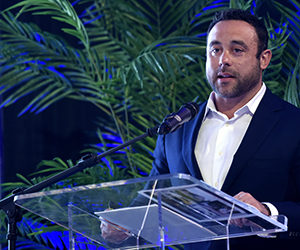 The theme of customer service and continuous improvement continued in the presentation by Brion Brady, general manager of the Jayco Motorized Group.

“The motorized division now occupies over 800,000 square feet on 137 acres,” said Brady. “There are still buildings going up and we don’t plan on stopping where we are going. Our new facility is second to none.”

He then acknowledged that even with this infrastructure in place, it’s still the company’s service advisors, parts coordinators, customer service representatives and service technicians that make the biggest impact on the business.

“It’s the customer experience. That is what we are doing here. We know we are going to have issues. Everybody within this company wants to do the business right. We may fall, but we will dust ourselves off and try for you again,” he said.

Brady pointed out that the Entegra service department worked on 598 coaches in the past year and fielded more than 77,000 service calls. According to Brady, the company has now built more than 4,000 motorhomes. He praised the customer service team and had them stand up for applause from the owners group.

“Ultimately it’s what you guys want that matters,” he said to the owners. “That’s why our customer feedback groups are so important.”

Brady pointed out that with 4,100 employees, Jayco’s overall retention rate is one of the highest in the industry and provides them with a competitive edge when it comes to experienced workers. “The majority of our people have been with us for a long time and that tribal knowledge is priceless when it comes to quality,” he said.

Brady then showed the group a banner that hangs in the production facility that states, “We at Entegra Coach believe you cannot inspect-in quality. You have to build-in quality,” as a daily affirmation for its employees. 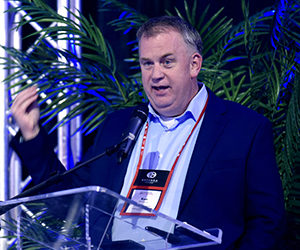 During his presentation, Ken Walters, vice president for sales and product development for Jayco’s Motorized Group since February of 2017, praised the company’s repair technicians working at the event.

“Yesterday we registered about 161 coaches here at the event for service repairs with about 500 repairs to provide to those coaches. Today, they concluded repairs on 103 of those coaches. Let’s give these folks some applause,” Walters said before turning his attention to several policy changes.

“We’ve made a couple of small-course adjustments over the last several months. We’ve opened no-charge warranty parts for you all and the response has been outstanding — for those that do your own repairs,” he said, adding another change was service scheduling over an entire year.

“In addition, we are going to get very serious about opening Entegra University. We are going to continue to push the experience you have here (at Homecoming) all over the country,” Walters said, mentioning that staff had just spent significant time in Salt Lake City, Utah, researching customer service programs to provide improved service.