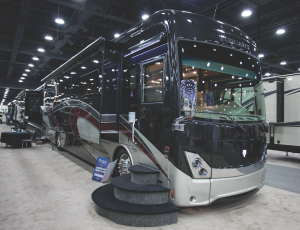 “This is a brand new 40-footer for us,” said Jon Krider, TMC’s vice president of product development and marketing, noting the lack of a tag-axle on this unit makes it attractive to a large group of RVers. “A lot of people do really big stuff, but there’s some people that just don’t want the second tag axle back there.”

Mounted on a Freightliner XC-R raised rail chassis, the 40RT has a side radiator, 450-hp Cummins ISL 8.9 engine and, according to Krider, “all the electronics and all the goodies.”

Other highlights include theater seating, mid-coach half bath and large rear bath, drop-down bunk over the cockpit, and Tilt-A-View inclining king bed in the master suite.