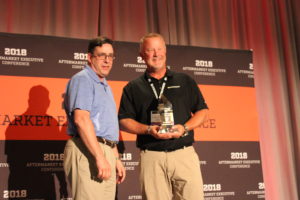 The annual RV Aftermarket Executive Conference is underway at the Hyatt Regency Coconut Point Resort and Spa in Bonita Springs, Fla., with the highlights so far being the handing out of several awards as well as the release of a survey specific to aftermarket buying tendencies among consumers.

Running Monday (Aug. 13) through Thursday, more than 250 people are attending the conference, which offers a unique format in which supplier companies meet with distributors to develop strategies for expanding their businesses in the coming year, introduce new products and services, and strengthen relationships.

Also of note, this is the first conference since the Recreation Vehicle Aftermarket Association (RVAA) voted last year to come under the auspices of the RV industry Association (RVIA).

The winner of the Product of the Year was Bauer Products, Grand Rapids, Mich., for its RV Vent Shade, a Mylar-backed shade that blocks most light from coming through an RV’s ceiling-mounted crank-style vents. Accepting the award was Tom Manning and Janelle Warner of Tom Manning & Associates, Bauer’s manufacturer’s representative.

Second and third place Product of the Year awards went to RV Intelligence of Longwood, Fla., and Clearwater, Fla.-based Southwire Co., respectively. RV Intelligence was recognized for “WoBLR,” an app-enabled RV-leveling system, while Southwire was honored for its Surge Guard 349050 portable model and its patent-pending load side protection.

The aftermarket survey, which was released Tuesday by RVIA, shows that the average RVer made about six aftermarket purchases in the past two years, compared to the newest and younger RV owners who made more than double that number. Among all those buyers, about one of every five purchases is made where the RV was bought, or secondarily, at one of the national retail chains, Amazon or local parts stores.