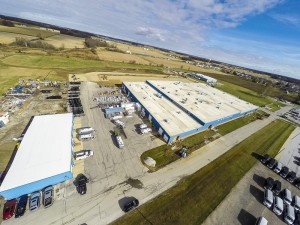 News in January that Airstream Inc. was receiving a $100,000 economic development grant from JobsOhio, the state’s private development arm, came as a reminder to some in the RV industry that the Jackson Center, Ohio, manufacturer is well underway on a $5.9 million construction project adding 94,000 square feet of production capacity at the company’s 80-acre campus.

The current project, bringing the company’s Dayton-area complex to 366,000 square feet including a new 16,000-square-foot office complex, will tentatively add as many as 125 new jobs to Airstream’s current employment roster of 482 people when work is completed in May while boosting production from 50 to as many as 75 units a week, according to Airstream President and  CEO Bob Wheeler.

With the global downturn still visible in the rearview mirror, Wheeler told RVBUSINESS.com that he never took lightly the decision to launch the company’s biggest expansion project since Airstream came to Jackson Center in 1953 as Thor Industries Inc.’s foundational division.

“I think it’s a level of concern, coming out of a downturn like we saw in ’08 and ’09, where our business was off 60% and we had to lay off half the company, hourly and salary,” said Wheeler, whose company also upgraded its Touring Coach facilities for Interstate Class B motorhomes in 2014 . “I think it’s natural coming out of that kind of an event to be pretty conservative and concerned about if and when that might happen again.

“But at a certain point, you’ve got to set that aside,” he continued. “It limits your growth, and in 2014 we made a conscious decision that we were going to stop living in the shadow of the recession and take advantage of the opportunities that were being presented to us, both in the near term and long term, and expand to meet our needs and make the investments that we needed to make to take us to the next level of growth.”

By now, in fact, Wheeler’s pretty comfortable with the company’s expansion plans – even though mating elements of the expansion with production won’t be as simple as flipping a switch because so many related changes are being made in the company’s manufacturing operations. “It keeps me up at night a little bit – it’s a big investment – but ultimately I’m convinced that we’ll find it was the right thing to do,” said Wheeler, adding that Airstream had no problem obtaining approval for the project from Thor, which was well aware of its capacity limitations versus the burgeoning demand for its products.

“When you have more orders than you can produce, it makes it a pretty easy decision that you need to expand to meet that demand,” he noted. “We’ve had fantastic support from Thor for our capital needs, as have all the Thor companies that have been expanding here recently. One of the singular benefits of being part of a large, very well-funded company is that the capital is there when you need it and you generally don’t have to give up your first-born to get approval.”