By: RVBusiness|Published on: May 25, 2018|Categories: Today’s Industry News| 0 comments 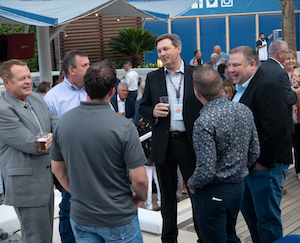 Airstream Inc.’s 2018 National Dealer Meeting, held Tuesday through Thursday (May 22-24) at the Tropicana Las Vegas Casino Hotel Resort, was in many ways a traditional event in both substance and style as the Thor Industries Inc. division’s management and dealers gathered for an array of presentations plus private meetings, receptions, product displays, a golf outing and tours of Hoover Dam and the Airstream Las Vegas dealership. (To view a slideshow scroll to the right side of the RVBUSINESS.com home page. Photos by Adrienne Angelo).

And sometimes, judging by the dealers’ response, tradition is a good thing.

“We talk about our dealers being partners, and everybody says that, but we mean it,” said Airstream President and CEO Bob Wheeler in his opening remarks during Wednesday morning’s main session. “And I’d like to think that we put our money where our mouth is, and this show is one of those examples for us to share our ideas and hear your thoughts, renew old friendships, break bread together, celebrate our successes and thank you for your partnership and support in a way we really only get to do once a year. It’s a chance to honor you as our business partners as well as our fantastic suppliers. We’ve got a great group of people here that support us in many ways and support this event. So, it’s our chance to thank them as well.”

Honing in on the business of the day in his turn at the podium, Justin Humphreys, recently promoted from vice president of sales to chief operating officer, reviewed the impressive facts as they stand for Jackson Center, Ohio-based Airstream, which has continued to grow its footprint in terms of sales and expansion. The company recently announced plans for construction of a $40 million, 750,000-square-foot plant at its Dayton-area headquarters.

That new facility, with a groundbreaking set for the late spring, will be the largest ever built by a Thor Industries Inc. division, Thor President and CEO Bob Martin reminded the attendees in his own brief remarks in Las Vegas.

“So year over year, for all Airstreams, we’re seeing a 30% increase (in sales),” said Humphreys, “and, again, last year was an all-time record year. So, to be 30% up on top of a record year is just really a testament to what everybody in this room is doing, and I’d like to give you guys a round of applause.”

Putting things in perspective, Humphreys pointed out that 2006 was the all-time record year for Airstream in terms of towable sales, and its volume today is three times that prerecessionary high for travel trailer retail numbers. “It’s just a phenomenal run,” he added. “And then when you look at the number of dealers — we talk about this a lot — we actually have fewer dealers than we did back then. So, Airstream is selling three times as many units with 24% fewer dealers.” 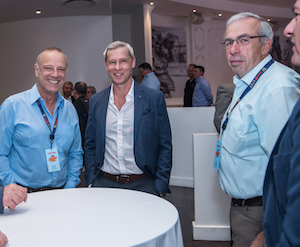 Also generating headlines at the dealer meeting was the Thor division’s announcement that it is extending from two to three years warranties on its entire product line.

“Probably the biggest news for really the entire line of products is that our warranties are going from two up to three years on the bumper-to-hitch warranty,” said Humphreys. “We have matched the warranty between our (motorized) touring coaches and our travel trailers. We’re really just recognizing all the quality and hard work that goes into these products. As part of that, (roadside assistance provider) Coach Net as well is being extended so that the warranty period and the Coach Net period both match — simple, streamlined and easy.”

Front and center on the product front at Airstream’s Vegas soiree was the Nest travel trailer, a small and remarkably “cute” towable released in April that sets a precedent with its fiberglass-skinned exterior coming as it does from a company known for its riveted aluminum RV exteriors. The Nest was purchased in 2016 from an Oregon designer and subsequently upgraded before its release.

Debuting at the show, meanwhile, was a new variant of the company’s popular Interstate Class B motorhome line assembled on the Mercedes Benz Sprinter van, the Interstate Slate Edition, featuring a totally new gray exterior and upscale interiors with new lighting, flooring, ultra-leather upholstery and a power bed system combining a couch and ottoman.

Also showcased in Vegas was a new Tommy Bahama Atlas Touring Coach, a custom variant of the Atlas B-Plus motorhome that Airstream introduced last fall, in addition to a shorter, more compact and maneuverable Interstate 19, a Sprinter-based van camper.

“It’s for a customer that might be intimidated by the larger units,” said Humphreys. “It’s built off of the Mercedes Benz 2500 series platform. That’s actually a smaller platform with single rear wheels, not the dual rear wheels. Of course, it has the premium turbo diesel engine and best-in-class top 50 features. That means we’re getting all the safety features we can from Mercedes Benz, and we’re putting it into this unit — everything that we know how to do well within Interstate because it’s part of the Interstate family.”