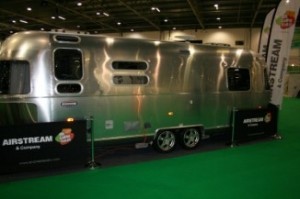 Airstream Inc. unveiled its latest family-oriented five-berth trailer at the ExCel Motorhome, Caravan and Camping Show in London yesterday (Feb. 14), according to a report in Caravan Times.

Showcasing the latest additions to their award-winning range of aluminium trailers, Airstream surprised Valentine’s Day visitors to the London show by giving them the first look at the new International 685 and the Series 2 534.

Having flown in from the U.S. to take part in the show, Airstream President Bob Wheeler, said: “Airstream has always been synonymous with great style and design and these two additions to the European range have got both in abundance.”

The new 685 has a neat layout that includes three fixed bunks at the rear, with a clever partitioning door allowing a children’s bedroom to be created in addition to the traditional double or twin singles at the front.

Anthony Slocock, technical director of Airstream, said that in creating the 685 the company was responding to demand for a bigger family model.

“The Series 2 534, meanwhile, is still gracefully compact but is incredibly roomy for a single axle trailer,” he added.