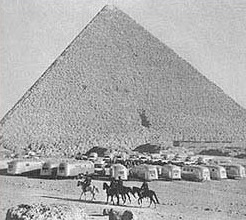 Wally Byam caravan in front of the pyramids of Egypt.

Looking over the next hill was Wally Byam’s business. The intrepid traveler built a luxury ride with Airstream — the iconic aluminum trailer — and enticed Americans to come along. Today, Airstream is one of the industry’s oldest brands.

According to a report in Investors.com, Airstream’s vintage cool is favored by celebrities such as the actor Matthew McConaughey and country singer Miranda Lambert.

Its enduring elegance has attracted the Eddie Bauer clothing store chain to partner on increasingly upscale models since 2011.

Back in the late 1930s, Byam’s company was one of 400-plus trailer manufacturers vying for customers. Of them, only Airstream — now a division of Thor Industries (THO), whose stock is on a 450% roll since 2009 — maintains its niche.

Byam’s key maneuver? Get in front. By leading ambitious, headline-grabbing caravans in the 1950s, he hitched his high-end product to Americans’ itch for adventure.

His most famous trip — from Cape Town at the southern tip of Africa all the way north to Cairo, Egypt, in 1959 — was called unachievable by skeptics. They predicted the continent’s untamed terrain would fell the moving manors. Byam’s seven-month, 13,000-mile journey was a tale of extremes — washboard roads, choking dust and tire-swallowing mud.

The 41 Airstreams forged ahead.