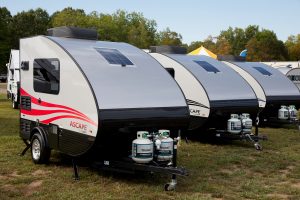 Earlier this year Somerset, Pa.-based Aliner introduced the Ascape, a tiny camper that can be pulled by just about anything, and officials said it has been met with enthusiastic response from both dealers and consumers. In fact, the response has been so strong that Aliner developed an even lighter version called the Ascape MT, which debuted at the Elkhart RV Open House.

“The Ascape is basically an ultra-lightweight, super-small travel trailer, but yet it’s fully featured. It has a  13-foot overall length and about a 10-foot living space. But in that 10-foot living space, it’s loaded. We’ve got everything from a 64-by-77 queen bed, air conditioning on top – not a window unit you usually see – furnace, water heater, a cassette toilet, and a little solar panel on the front, which will keep your battery charged. The only thing it doesn’t have is an inside shower – but it does have an outside shower,” said Chuck Phillips, Aliner’s territory manager for the Midwest and Northeast, adding the Ascape represents Aliner’s first foray with a conventional travel trailer. The company also produces folding trailers and Somerset-branded popup campers.

While the Ascape has a 1,500-pound dry weight, the more efficient MT version comes in at 1,170 pounds. Both lines offer easy towing capabilities and almost 6½ feet of headroom thanks to a drop-down floor off the rear entry door.

“Many of our customers told us that they love the look and design of the Ascape, but they are not interested in the bells, whistles and appliances that come with the current product,” said Director of Sales Allan Reeping. “They want sleeping quarters with lots of storage – a lightweight trailer that doesn’t require them to lay down in bed to change their clothes, or crawl through a small door on their knees to get into bed.”