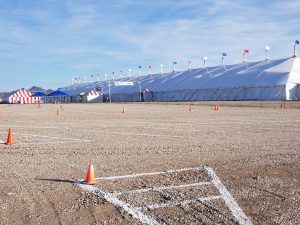 All the preliminary signals pointed to another gangbuster Quartzsite RV Show, an annual event in Arizona’s scenic Sonora Desert that again backed its claim as “the largest gathering of RVers in the nation.”

“When we first got to Quartzsite, we noticed an influx of early arrivals, which was confirmed by many local businesses,” said Kenny King, who has overseen the show since its inception in 1984. “That’s always an indication of pent-up anticipation. Plus, our exhibit space sold out in advance and many last-minute exhibitors were turned away.”

Those early indicators proved to be on the mark as King reported that the crowd swelled to over 125,000 people during the Jan. 20-28 event, which, in turn, generated record sales for exhibitors.

“Retail sales were brisk with many all-time records being set early and often by several veteran participants,” King told RVBUSINESS.com, noting that around 250 companies were represented occupying approximately 360 exhibit spaces. “One exhibitor claimed that they had just finished up the Barrett-Jackson classic car auction, one of the largest and premier events in that industry, and they had surpassed their total sales halfway through the second day of the Quartzsite Show.” 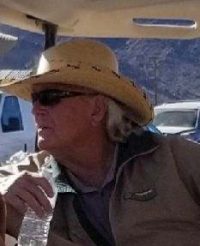 Curt Curtis, owner of the multilocation dealer, reported to RVBUSINESS.com midway through the show that the company was on track to sell 130-plus units, a 10% increase from the 2017 edition. “It’s really been a great mix,” he said. “We’ve been selling lots of toy haulers, bigger fifth-wheels, and gas and diesel motorhomes — both new and used. We’re not seeing too many travel trailer buyers. It’s just not that kind of show.”

In line with reports from other venues in the early round of 2018 RV shows, King said that he observed a decidedly younger demographic among attendees.

“The crowd seemed much younger than ever before,” he stated. “Where once you would rarely see anyone under the age of 55 in Quartzsite, young families pushing strollers while holding other sibling’s hands were prevalent. I think that’s definitely a good sign for the show and the future of the RV industry.” 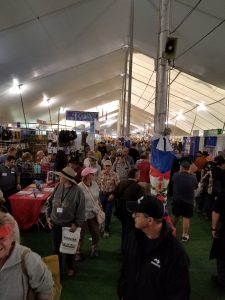 The crowd swelled to over 125,000 at this year’s Quartzsite Show

In addition to RV-related exhibitors, King reported that the travel and tourism sector was strongly represented. “We had RV resorts and campgrounds from across the country, including some of the larger firms like Equity Lifestyle Properties, KOA and Good Sam,” he said. “There were also several prominent companies, like J.C. Penny and Disney World, that were recruiting work campers. Our show has really turned into a huge draw for work campers.”

King maintains that one of the attractions for RVers is access to installation and service. “There were a dozen full-blown RV service bays that were busy the entire show,” he noted. “The Blue Ox service area had a wait time exceeding three hours as they were offering a special of free service and maintenance. Redlands Truck & RV Supply occupied a large portion of the service bays with approximately 30 service technicians offering immediate installation on everything from Michelin tires to Gale Banks Performance products and everything in-between.

“By all aspects, the show was a huge success,” he added. “It amazes me every year that people keep coming back. I still get sick to my stomach that first day, worried that nobody will show up. But when the gates open up and there is a 1/4-mile long traffic jam and 1,000 people in line, I figure we’re going to be OK.”