Anticipation Growing for Round of Weekend RV Shows 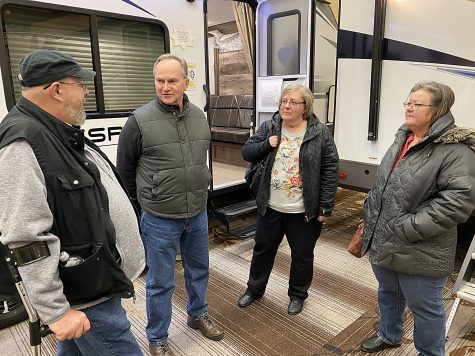 Lane Laffoon (L) and his wife Jennifer (R), of Plymouth, Ind., discuss the prospect of an RV purchase with Mike and Diana Kopczy, of LaPorte, Ind.

Whether in the market for a new RV or just wanting to kick the tires on the latest the industry has to offer, now is the time to check out RV shows across the nation.

Judging by early indications, strong sales seem to be the prevailing sentiment.

Larger shows in Denver and Cleveland are on tap this weekend — the Colorado RV Adventure & Travel Show and the Ohio RV Supershow.

This year’s Valley RV show was expanded to four days for the first time in many years — a change driven by dealer input, according to Matt Rose, show coordinator and director of recreational vehicles for the Indiana Manufactured Housing Association-Recreation Vehicle Indiana Council (IMHA-RVIC).

“The dealers were the ones who said, ‘Hey, why don’t we make this a four-day show like all of our other shows?’ so we expanded it to make the show available to more people — folks who don’t want to fight the crowds on the weekend. We think it was the right choice and people have been very receptive,” Rose said.

He added that first-day attendance was better than expected and, more importantly, “We opened the show at 10 and we had sales on the books by 1:30,” he said. “And that’s what it’s all about.”

Jeff Pastore, vice president of Hartville RV Center, in Hartville, Ohio, was in attendance Thursday (Jan. 9) at the Cleveland Show. He’s beyond upbeat about the prospects for 2020.

“I think it’s going to be a phenomenal year,” he said. “Our fall was extremely strong going into the start of the new year and it’s continuing.”

He said show organizers told dealers that even though it was only the second day of the show, “we were 100 people short of doubling the best first-day attendance in the history of this show.”

Pastore said dealers at the show have been “extremely busy,” adding, “We’re writing a lot of business and seeing a lot of sales.” Pastore, who’s due to be inducted this year into the RV/MH Hall of Fame, also noted that sales are across all segments of the RV industry, from the largest fifth-wheels to “couple strollers” and everything in between.

Kyle Ferguson, director of sales for Trailer Source RV in Wheatland and Colorado Springs, Colo., was at the Denver show Jan. 9.

“It hasn’t been open very long and we’ve seen some good traffic,” he said. “We’ve already sold as many today as we did all day the first day last year and we have five hours to go.”

“But you know, I think 2020 is going to beat ’18, which was a really good year for us. We’re seeing good traffic so far this year,” he said. “Things are looking good.”

Rose said the South Bend show features a variety of motorhomes, fifth-wheels, toy haulers and travel trailers — something to fit every budget and camping style. Booth vendors are on hand representing campground and camping information and more.

Manufacturer’s representatives are on hand and dealers are offering special deals and financing packages.

John Whalen, RV Internet sales manager at Goshen RV Supercenter, says his dealership has been at the show every year for the last seven years.

“We had a good year last year,” Whalen said. “We’re past the holidays now and it’s time to kick it off again. This is a good start.”

Showgoers were upbeat about the event as well.

Mike Kopczy and his wife Diana traveled from LaPorte, Ind., and were new to the RV scene. They have a rustic cabin in Minnesota and were considering remodeling, but “We decided getting an RV would actually be more affordable,” Mike Kopczy said.

“We’re retiring,” Lane said. “We’ve got a small camper and we’re looking to get a bigger one. We were glad to see the show open Thursday. We missed the big crowd.”