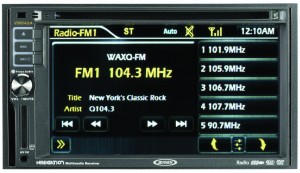 Elkhart, Ind.-based ASA Electronics has introduced the VM9424 multi-media high-definition radio receiver with built-in GPS navigation and rear camera input for RVs. According to a press release, the system will save space on any RV dash by combining the stereo and observation system into one unit.

The 6.2-inch touch-screen stereo features 160 watts of power, an AM/FM tuner with 18 FM and 12 AM presets along with a high-definition radio receiver.

• Playback of multiple digital media files and a MP3 ID3 tag that displays the current title, artist and album.

• XM satellite radio ready with subscription and Bluetooth technology via the JENSEN BTM10.

• A rear camera input enabling drivers to have vision at the rear of their vehicle and have better sight when merging or changing lanes.

According to ASA, the VM9424 is “an ultimate multimedia system in that it not only includes the necessary stereo features, but also enhanced features such as observation and navigation.”