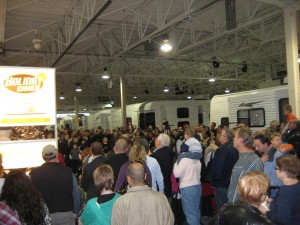 Attendance of 17,585 people at the Toronto RV Show & Extravaganza Jan. 21-24 represented a 52% increase from 2009, according to the sponsoring Ontario Recreation Vehicle Dealers Association (Ontario RVDA).

”We were pretty excited,” Shannon O’Callaghan, Ontario RVDA executive assistant, told RVBUSINESS.com. ”It blew us away.”

Forty dealers displayed about 500 RVs at the show indoors at the Toronto Congress Center.

”On the Thursday alone, which was Senior Day, we were up 78%,” O’Callaghan said. ”That seemed to really work this year.”

What’s behind these impressive numbers?

The association blitzed the local market with advertising on 13 radio stations and five TV stations.

”We take surveys every year on how people heard about the show and our television and radio advertising had a lot to do with the increased attendance. And over the years as well, word-of-mouth has helped us grow a lot,” O’Callaghan said.

She reported that some dealers experienced more than 100% increases in sales. ”Those that sold 20 units last year doubled that this year,” she said.

Generally, she added, retail traffic has been picking up recently at Ontario dealerships.

”And they are reporting that their lot traffic picked up this week after the show,” O’Callaghan said.