By: RVBusiness|Published on: May 30, 2018|Categories: Today’s Industry News| 0 comments 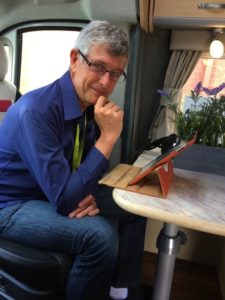 An Australian who’s found success with iMotorhome, an electronic magazine geared toward RV consumers in the land Down Under, is hoping to duplicate that success with a similar digital-only publication in North America.

Called “#RV,” the monthly publication is aimed at Millennials and GenXers, Publisher and Managing Editor Richard Robertson told RVBUSINESS.com. Each issue features consumer-oriented content including RV tests, product releases, news, technical and travel stories, RV park reviews and high-quality photography. The initial issues of #RV published in April and May, and the June edition will be released shortly.

“#RV magazine readers are defined by attitude not age. They seek freedom, experience, fulfillment, and authenticity over the conformity of traditional life, while pursuing a lifestyle that values balance and rewrites expectations of the new normal. In other words it’s very much a Gen X, Gen Y, Millennials thing,” Robertson said.

“In one way we’re still a traditional RV magazine, so we’re focused on RV tests and technologies and products and everything RV-centered,” he continued. “But we also have a lot of coverage of the van life movement, lifestyle experiences, and topics that are relevant to the younger market. And to that end we have five people writing for us on a regular basis now in the States. They’re all full-time RVers, and all but one are in the Millennial target range. They add a real level of authenticity to the magazine because it’s written by full-time RVers, for RVers who are full time, or just starting out, or just dreaming of it.” 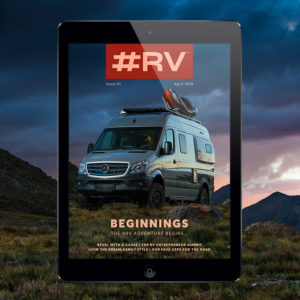 Whereas iMotorhome is a free subscription with paid advertisements, #RV is available by paid subscription – $2.99 for single issue, or $23.99 for an annual subscription – with free advertising, at least initially. A free sample issue of the electronic magazine, which averages about 130 pages, is available via the #RV Magazine app in the App Store and Google Play.

Robertson, who owned an orange VW Kombi camper in the early 1980s and has been a dedicated RV journalist for nearly 20 years, said while #RV is not seeking paid advertisements for the time being, it is looking to “partner with like-minded organizations.”

“From an advertising point of view, at this stage, we’re still building relationships with the industry,” he explained. “We don’t have set rates and such; we’re looking to build those working relationships, and we need to get our message out. Obviously it’s very early days for us, so we need to get our message out on the quick and actually partner with people who can help us get the message out and who have quality products.

“If we find the right companies,” he continued, “we would offer them free advertising for up to 12 months, in return we would be looking for them to promote us in a range of banners on their website, or a website link or email links, or we can do promotions with them if have a very active social media presence. They can promote the magazine and we in turn can promote them through the magazine. And then more conventional advertising will likely follow in 12 or 18 months time.”

Robertson said he and Brand Manager Mitch Crowe attended the National RV Trade Show in Louisville, Ky., last year to gauge support for #RV, and determined there was enough interest to give the project the green light.

“We basically came away from the show excited about the concept of starting a magazine that spoke to those people rather than the traditional Baby Boomer RV owners,” he said.

The two hope to build the magazine’s audience organically through social media – Facebook, Twitter, Pinterest and Instagram using the @hashtagrvmag handle – and word of mouth in much the same way iMotorhome has grown. In six years, the publication grew from literally no readership to now being one of the more widely read motorhome publications in the Australia-New Zealand market.

“We are literally starting from scratch and looking for opportunities as we go, so it’s very early days, but we always knew it would be,” Robertson pointed out