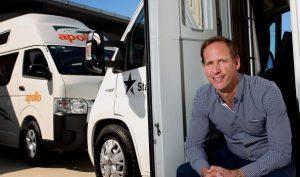 Very few business success stories begin with a second-hand campervan sitting in a backyard in suburban Brisbane. In fact, this is probably the only one.

It’s the 1970’s and Gus and Carloyn Trouchet love taking their two young sons on school holiday getaways in that motorhome but in between those times, what to do with the thing?

Business News Australia reported that the answer is a simple one: rent it out to other people and make a little money. By 1985, the Trouchet’s founded Apollo with one vehicle and today their two sons, Luke and Karl, head what is now a true multinational business which manufactures, imports and retails a range of recreational vehicles.

Apollo is also a major player in the rental fleet operator segment and is one of the largest RV operators in the world with more than 4,000 vehicles in Australia, New Zealand, the U.S. and Canada.

Apollo’s business is a complex one, but its model and sales strategy is relatively simple: build or buy it, rent it and then sell it.