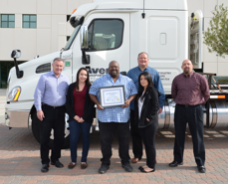 Avery Transport Inc. announced that one of the company’s professional drivers has earned the prestigious “Million Mile Award” and driver recognition from the National Association of Small Trucking Companies (NASTC).

According to a press release, NASTC represents over 4,500 trucking companies in the U.S. and Canada that employs over 65,000 drivers collectively. Each year the association sponsors a driver of the year program to recognize the very best drivers within their group. Among the drivers nominated for this prestigious honor is Terrance Benton who drives for Lancaster, Calif.-based Avery Transport.

“As a nominee for the award, Terrance Benton joins a very elite group that represent the very best of our 65,000 drivers,” said Buster Anderson, executive vice president of NASTC. “It says a lot about a company when they can attract and keep employees of this caliber.”

“Not only is Terrance an accomplished professional driver, he has had a significant role in helping develop many of our current load securement techniques, including the use of straps and ratchets instead of chains and binders,” said Elliotte Fajardo, general manager for Avery Transport.

As of Nov. 1, Benton had accumulated 1,237,901 accident free miles with Avery Transport.

Jack Cole, president of Avery Transport Inc. and president and CEO of Lance Camper Mfg. Corp, noted, “We are extremely proud to have a driver of Terrance’s caliber on our team and congratulate him on achieving this outstanding milestone in his career.”