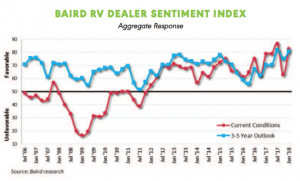 Dealer sentiment was near all-time highs as of late January, suggesting that retailers are optimistic about 2018, according to Robert W. Baird & Co., the Milwaukee-based investment firm that surveys dealers quarterly in partnership with RVDA.

When the firm surveyed dealers in late January, its dealer sentiment index stood at 83, compared with 79 a year earlier. Looking out three to five years, the index was 81, up sharply from the reading of 70 a year earlier.

Dealers surveyed reported that sales of towable RVs were up by mid-single digits during the November through January period, compared with the same time a year earlier. Motorhomes sales were up by low-double digits during that period. The upbeat mood was reflected in several dealer comments, such as a 40-year veteran retailer who said he set records almost every month in 2017 and is experiencing a strong start to this year.

“We expect big increases in sales,” he said. “We just hope the factories can keep somewhat decent build times. We have ordered much more aggressively this year to keep units in stock and not run out like we did last year. Customers seem to want to spend money on the RV lifestyle, so the industry has a lot going for it right now.”

But not everything is rosy. Some dealers cited issues such as poor product quality and bad after-the-sale service.

“Manufacturers better improve dealer relations and invest in legitimate service, or our industry may never recover from the black eye it will receive for the workmanship, poor warranty payments, and lack of technical training,” one dealer told the Baird firm.

Another dealer said that when compared with the past three years, this winter’s RV market was “a tad slower” and that “it’s difficult to keep morale up when little is going out the door.” With fewer units being sold, the dealer has had to rely more on his service department to generate income while also having to raise wages to retain his best service techs.

Dealers said they had 118 days worth of new towables and 111 days of new motorhomes in inventory as of late January.

For the remainder of this year, 37% of dealers plan to expand their towables inventory, while 16% will shrink it. The remaining 47% of dealers want their factory orders to equal their retail sales throughout 2018.

Among motorhome dealers, 15% plan to have more units in inventory, and 15 percent plan to carry fewer. The remaining 70% plan to order one motorhome for each one they sell to a retail buyer.