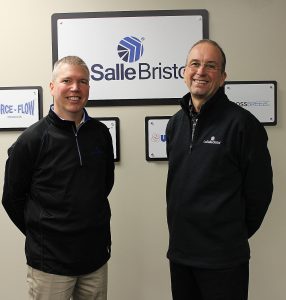 LaSalle Bristol Corp., a subsidiary of U.K.-based Arran Isle Ltd., recently announced a leadership change as Rick Karcher retired as president and CEO and was replaced by Andrew Batson.

Karcher led the Elkhart, Ind.-based company, a key distributor to the recreational vehicle and manufactured housing industries, for close to a decade.

“Rick has provided outstanding leadership during the most tumultuous period in LaSalle’s history,” stated Arran Isle Group CEO Martin Wardhaugh in a press release. “His steady hand on the tiller navigated us safely through the Great Recession of 2008-2012, when so many organizations perished or were irreparably damaged. LaSalle Bristol emerged in a good position, with a stronger team, more own brand products and an innovative culture.”

Karcher, a co-owner of Arran Isle, will continue to serve in the role of non-executive director for LaSalle Bristol. At the end of 2017, he will take over as chairman of the company, replacing Bill Schmuhl.

Batson is an experienced sales and marketing oriented executive who has spent most of his career in progressive roles with Whirlpool Corp., based in Benton Harbor, Mich.