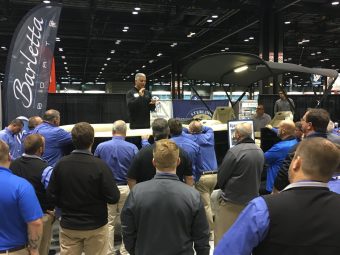 The industry, and the cast of players, are new to Bill Fenech, but as he began laying the groundwork and putting together the pieces for the recent launch of pontoon builder Barletta Boat Co. LLC he discovered plenty of common ground.

“There really aren’t any two products that are more similar than pontoons and RVs,” said Fenech, who was instrumental in the formation and rapid success of startups Keystone RV Co. and Grand Design RV Co. “It’s the same formula — assembly/manufacturing in Elkhart, and then it’s dealers and retail. That’s RVs. There are differences, but the core business is identical, with a few nuances.

“It’s uncanny how for so many years the RV industry was behind the car industry in terms of manufacturing and dealer support,” added Fenech, who serves as Barletta’s president, co-owner and managing partner. “What I found is that that the boating industry was behind RVs. They are still doing things that we fixed years ago. It became obvious that I had read this book before and I was convinced that we could bring something very different to the pontoon sector.”

Settling into a 110,000-square-foot, recently remodeled manufacturing facility on 37 acres in Bristol, Ind., Barletta’s management team mapped out a highly aggressive rollout designed to have product coming off the line in time for the early round of 2018 boat shows. 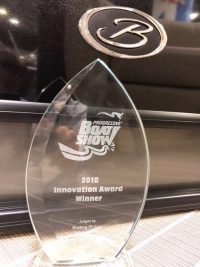 Barletta received the 2018 Innovation Award at the Minneapolis Boat Show

“Literally, we had eight to 10 people that burned the midnight oil all weekend,” Fenech told RVBUSINESS.com last Thursday (Jan. 11), noting that the total workforce currently stood at just over 30. “Some parts came in late, but we were able to christen the first boat — a luxury class L25U with an ultralounge and a Mercury outboard motor — at 11:30 p.m. on Sunday which we shipped to the Minneapolis Boat Show. Our second boat just shipped to the Chicago Boat Show. It took a little longer because our objective was to not just build a ‘me too’ product. It was important to have something that was different and unique that would stand out on the sales floor.

Fenech noted that the company is entering a marketplace that is “in a very strong growth cycle” as pontoons have transformed from the traditional “party boat,” to a highly versatile product.

“It’s crazy how pontoons have evolved. It’s become a high-performance product, but it still offers all the space and comfort with a lot of shortage,” Fenech said. “It’s really nice to have some tailwind. We’ve been talking about getting into the market for years and years and strongly looked at Nautic Global Group when it was up for sale in Elkhart. But the timing wasn’t right. Now the timing is right.” 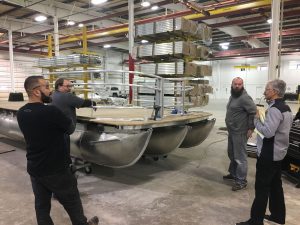 While ramping up on the production side, Fenech also focused on building a network of “A dealers,” calling on some RV and marine retailers that “were old friends” while also hooking up with some well connected people associated with the industry’s 20 Group.

“We’ve been fortunate because there is such demand for a better way of doing business,” Fenech said. “There was a vacuum and a need for what we’re bringing to the table. We actually stopped signing new dealers, which is unheard of. We do have a lot of open markets, but we told dealers they would have to wait.

“We are doing a lot of the same things that we accomplished at Grand Design when it comes to dealers and end users, including performing a complete predelivery inspection (PDI) on every unit produced. When it leaves our factory it’s ready to be set up on the sales lot. We’re moving quickly but we have a solid plan in place with our objective to become a leading boat manufacturer.”