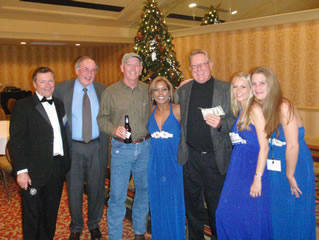 Sonny Rone (third from right), displays the $1,000 he won at a recent blackjack tournament in Louisville, Ky. At left are Carl Sconnely, president of Systems 2000, and Rogers Freedlund, president of American Guardian Warranty Systems, the tourney sponsor. Third from left is Jim Gauthier, second runner-up. Also pictured are Systems 2000 employees.

Sonny Rone, the owner of Sonny’s RV in Evansville, Wyo., was the second round winner of the Systems 2000 Blackjack Tournament held Dec. 2 at the Crown Plaza Hotel in Louisville, Ky. The annual tournament was held during the National RV Trade Show.

As Carl Sconnely, president of Systems 2000, awarded the prize of $1,000 cash, Rone made the decision to donate the money directly to the Recreation Vehicle Dealers Association (RVDA) Education Foundation to help the RV industry.

“I have known Sonny and done business with him for almost a decade; he has always been a great businessman and a class act,” said Sconnely.

The tournament was co-sponsored by American Guardian Warranty Services and hosted more than 100 RV dealers. The first round $1,000 cash winner was Chasity Hamond of TC’s RV’s St Albans, Vt., who during the tournament had the opportunity to split five hands of aces and win all five of those hands with perfect 21s!

There were also $500 in American Express gift cards and cash given out as door prizes in a raffle held throughout the night.