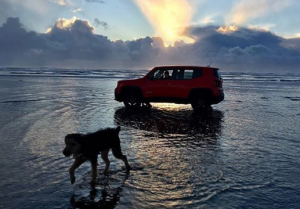 Of the hundreds of vehicles for sale at the moment, the Jeep Renegade may have the strongest resemblance to a woodlands critter — perhaps a hedgehog, or a bear cub.

Bloomberg reported that the rig is tiny and adorable — attributes not lost on caustic car critics who piled on its 2014 launch as product strategy gone awry. The machine was, they decried, a “baby Jeep”; a Fiat in lumberjack trim. In short, the Renegade was Fiat-Chrysler Automobiles NV Chief Executive Officer Sergio Marchionne’s shameless ploy for young adults Instagramming their way to brunch. But a hearty slice of avocado toast is just the start of the Renegade’s day.

Jeep says that of the 278,000 or so Americans who have bought a Renegade, 26% drive their little beast off-road and 12% of them tow something with it. It is both a useful utility vehicle and one that is actually used. In that sense, it’s not an outlier.

Something funny is happening to the big, brash SUV and its smaller sibling, the crossover. They are shifting from an exercise in aesthetics to an instrument of athleisure – a means to a rugged, dirty end, instead of a marketing gambit.

And then there are the toys. Emboldened by a bullish stock market and catalyzed by cheap credit, U.S. consumers have been spending liberally on big gear. Last year, Americans bought about 270,000 new boats, almost 50,000 more than they did in 2014, according to the National Marine Manufacturers Association (NMMA). They also bought roughly 442,000 tow-able campers, a 41 percent increase from 2014, according to the RV Industry Association (RVIA).

On Outdoorsy, a sort of Airbnb for recreational vehicles, roughly half the renters are under age 40, and 43% of the rigs available to rent are towable RVs. “Millennials don’t necessarily like to sit around in camp chairs and get drunk,” said CEO and co-founder Jeff Cavins. “They take everything with them: mountain bikes, paddleboard, camera equipment. … There’s a massive thirst for adventure.”