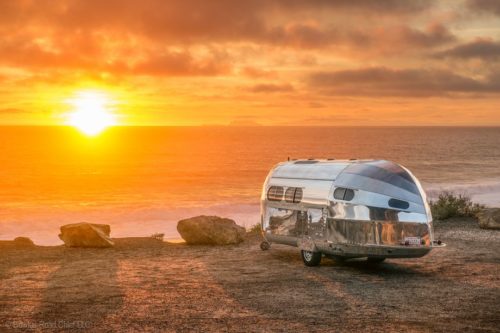 Bowlus Road Chief’s story began almost 90 years ago with the company’s founding by innovative engineer and aircraft builder Hawley Bowlus, who was best known for his involvement in building the famous aircraft Spirit of St. Louis and for training many of the first known glider pilots such as Charles and Anne Morrow Lindbergh.

He gained further acclaim for his determination to design and create the first-ever lightweight travel trailer, which he envisioned being used for transporting flight crews to their takeoff locations.

Bowlus completed the first model of the aluminum Bowlus Road Chief in 1934 at his family ranch in San Fernando, Calif. The trailer weighed in at 1,100 pounds and included bunks for overnight trips and an intercom system to connect the driver to the riders in the RV. His design evolved to reflect his knowledge on aerodynamics, fashioning the innovative design after the aircraft he developed.

The Road Chief was immediately considered revolutionary and became famous in the United States, being featured in the Hollywood movie “Red Salute” and covered by all of the popular magazines. Stars such as Clark Gable, Carol Lombard and cosmetic queen Merle Norman also purchased Road Chiefs.

Bowlus produced around 80 of his travel trailers in several different designs before he returned to his career in the aircraft industry in 1937. Over half of the Road Chiefs built in the 1930’s are still around today, most being held in private collections.

The Bowlus Road Chief Co. was re-envisioned by CEO Geneva Long in 2012 when her family discovered a vintage trailer in a field in Washington that had been used as the headquarters for a local club. The trailer received an extensive restoration from the frame up and when the renovations were finished the family celebrated with a cross-country adventure in their newly imaged Road Chief. This inspired Long to design and create a contemporary version of Bowlus’ original design, and from there the modern-day Bowlus Road Chief was born.

Today, Bowlus Road Chief is based in Oxnard, Calif., and has been producing its new designs of the original product for six years, beginning when Geneva Long started the project in 2012. They have two models, the Endless Highways and the On the Road trailers. 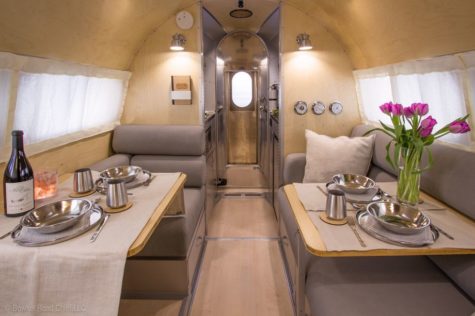 Bowlus Road Chiefs are known as some of the most innovative and unique travel trailers in the world. Long noted, “Other than the shape, the craftsmanship and approach, they’re incredibly technologically advanced. We were the first people to put lithium ion phosphate batteries in a travel trailer, which we did three years ago. We have heated floors, charging options for I-pads, laptops and routers. They’re very technologically advanced.”

With the lithium phosphate batteries, the travel trailers are built for year-round and off the grid trips, Long noted. The Endless Highways series is built to last over a week off the grid or indefinitely through the use of solar panels with the lights, heating, water pumps and outlets all working efficiently.

Long explained, “For the most part, our buyers are first-time buyers. It’s really a niche that speaks to more of the modern adventurer. There are a segment of RVers who have obviously enjoyed some other RV in the past and wanted something of the quality of a Bowlus Road Chief. We design for those who appreciate value, American craftsmanship, sustainability, and innovation.”

Bowlus Road Chief models range from 2,500 to 3,200 pounds with prices ranging between $137,000 and $187,000. Customization is available through the company’s “Bespoke” program, and models are delivered directly to the consumer.

Long concluded, “Our mission is to stay true to our design DNA, and to built models that reflect our philosophy of passion for adventure and innovation. We believe that Hawley Bowlus would be proud to see the Road Chief riding again today, still maintaining its reputation as the most advanced travel trailer in the world.”