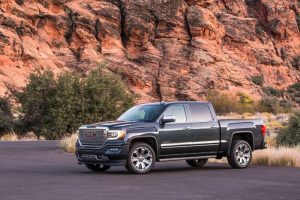 Although GMC isn’t officially GM’s luxury brand — that designation belongs to Cadillac — the brawny pickups and sport utility vehicles command hefty prices rivaling those of traditional high-end automakers. Add on the tony Denali models that comprise nearly a third of GMC sales, and it’s no surprise it’s become the highest-margin vehicle line for the biggest automaker in the U.S.

“GMC is a massively profitable brand,” Duncan Aldred, vice president of Buick and GMC sales, said in an interview in Detroit this week, “and one of the big reasons we have double-digit profit margins in the U.S.”

In a declining U.S. vehicle market, automakers are increasingly focusing on high-margin models, which pad profits better than traditional sedans. The average GMC sells for about $44,000 — up $10,000 from 2010 levels — and is priced almost 40% higher than standard vehicles purchased in the U.S. High-end GMC Denali models go for even more — beating even Mercedes and BMW — earning GM a pretty penny for every one it sells.
For the full story click here.