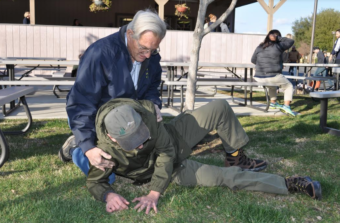 About 75 campground and RV park operators gathered at Pechanga Resort & Casino and Pechanga RV Resort in Temecula, Calif., Wednesday (Feb. 28) to learn how to better prepare themselves for disasters and to identify suspicious activities at their parks.

He noted that Timothy McVeigh used a Ryder rental truck, about the size of an RV, to transport the fertilizers, diesel fuel and chemicals he used during the 1995 Oklahoma City bombing, which killed 168 people and injured 680 others. Sanchez added that drug and bomb makers use lots of chemicals.

“If you have someone coming into your park who makes drugs or explosives, you’re going to see a lot of trash materials, (chemical) packaging materials,” Sanchez said.

“If you smell a strong chemical smell of any type, don’t keep smelling it,” Sanchez said, because many of the chemicals used in drug and bomb making are very harmful.

So harmful, in fact, that the use of these chemicals can lead to unexplained animal deaths as well as the deaths of birds, insects and plants around the RV where the drug or bomb making activity takes place.

Warning signs could include patches of dead, discolored or withered vegetation as well as the presence of oily droplets or an oily film on ground surfaces.

Other things to look out for include guests with lots of heaters and coolers as well as glassware, ranging from coke bottles bundled together to glass vials used in laboratories. Cylindrical containers used to spread pesticides are another warning sign.

“The people who run these labs are not geniuses,” Sanchez said. “A lot of people are high when they cook these drugs.”

As a result, he said, such activity can lead to fires and explosions.

Sanchez urged park operators to contact law enforcement immediately if they have a suspicious guest. He noted that the operator of the motel where McVeigh spent the night before the Oklahoma City bombing was suspicious of McVeigh because he was moving containers in and out of the Ryder truck, but he didn’t call authorities.

Border Patrol Senior Agent Lee Bejar said his agency is involved not only in protecting our borders from undocumented immigrants, but from drug smugglers. He added that undocumented immigrants are coming into California not just from Mexico, but from many other countries. He said parks that are close to the coast should be especially vigilant because lots of smugglers are coming into California from the coast.

The afternoon session featured Patrick Hardy of hytropy.com, one of the nation’s top disaster planning firms.

He urged park operators to prepare disaster plans that cover the threats they are most likely to face, such as earthquakes, fires and floods. He said it’s also worthwhile to prepare plans to address active shooters and hazardous materials spills.

“Risk analysis is important,” he said. “It tells you what the Big Bad Wolf is. But where the rubber meets the road is with drills.”

To emphasize his point, Hardy had park operators participate in a simulated hazardous materials spill at Pechanga RV Resort that included dozens of injuries as well as the involvement of real firefighters who arrived on the scene with their emergency lights flashing.

Hardy conducted the exercise to underscore the importance of disaster planning, the chaos that can ensue when a disaster happens, and the value of assigning people in advance to take charge during disaster situations, especially when the park owner is not present.