According to Woodall’s Campground Management (WCM), sister publication to RVBusiness, also lost in the fire were two RVs owned by Scott Cory, the owner of Ventura Ranch. No campers have lost their RVs and no RVs sitting in the campground’s storage lot were destroyed, according to Gast.

The structures were lost due to the Thomas Fire which started on Dec. 4 and is being fueled by hot and dry Santa Ana winds that are sometimes clocked in excess of 60 mph, has grown to more than 230,000 acres in size one week later. Only 15% contained, the Thomas Fire is currently the state’s largest blaze, according to the California Department of Forestry and Fire Protection (Cal Fire).

Wildfires continue to batter southern California as dry air and heavy winds have made it difficult for firefighters to gain a foothold.

The Thomas Fire, which started on Dec. 4 and is being fueled by hot and dry Santa Ana winds that are sometimes clocked in excess of 60 mph, has grown to more than 230,000 acres in size one week later. With only 15% contained, the Thomas Fire is currently the state’s largest blaze, according to the California Department of Forestry and Fire Protection (Cal Fire). 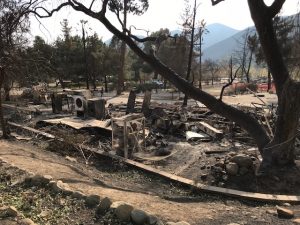 About 130 miles north of Ventura Ranch, staff members at Pismo Coast Village RV Resort in Pismo Beach, Calif., have been busy taking in evacuees, not only from the Thomas Fire, but also from other active blazes in southern California. The Thomas Fire is the largest of five major infernos plaguing southern California from Santa Barbara to San Diego.

According to Darrell Sisk, reservation supervisor at the resort and past president of the California Association of RV Parks and Campgrounds (CalARVC), they had more than 65 sites occupied by evacuees in mid-December, with more sites available.

“Usually this resort is packed, but the three weeks between Thanksgiving and Christmas we usually see a lull,” he told WCM. “So, this is really the only time of the year that we would have been able to take in evacuees, so that is fortunate. We have about one-third of the park available right now.”

Sisk said that local residents donated toys, baby supplies, food, tents, and much more, to help out the evacuees that were showing up at the resort. Two local RV rental companies, Luv 2 Camp in Pismo Beach and RV Rentals on the Central Coast in Atascadero, had donated travel trailers for evacuees to stay in for free or at a reduced cost.

Sisk said they had not missed all of the effects of the wildfires though, with heavy soot and smoke filling the resort at times.

“At one point the sky was dark and the sun was only a small dot in the sky,” he said.

Sisk said he anticipates it taking awhile for all the evacuees to get back on their feet, as some have lost everything. 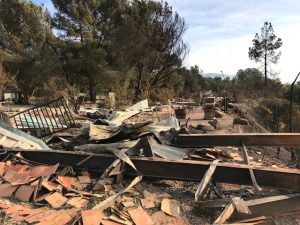 A row of cabins lies in ruins at Ventura Ranch KOA

Farther south, near San Diego, Clint Bell, whose family runs the San Diego Metro KOA, along with a number of other KOA’s, said that his family’s campgrounds have not been impacted by the Lilac Wildfire, which now covers more than 4,000 acres and is 90% contained, according to Cal Fire.

“Right now there is no threat, but things could change if fires continue to move south,” he told WCM.

Bell said that they could see smoke in the distance, but that air quality at their KOA in San Diego, and their other resorts, had not been impacted by the fires.

“It has just been extraordinarily dry,” he said. “It always is dry, but last year it rained quite a bit and then we saw overgrowth, which later dried out, which adds fuel. Then when the wind blows from the east it usually is pretty strong and we are seeing strong gusts of dry air.”

Bell said that he was going to continue monitoring the blazes, but that his resorts have evacuation plans in place if they need to evacuate.

Debbie Sipe, executive director of CalARVC, said she hadn’t heard of any other parks being impacted by the wildfires, but that she was concerned about Ventura Ranch.

Sipe said she monitors the growth of the fires on the Cal Fire wildfire map and that she calls parks to check on them.

“Right now, the Thomas Fire is the fifth largest wildfire in California history,” she told WCM. “They are saying by the time it is done it could be the largest. Having fires like this in mid-December (in southern California) is definitely not the norm.”