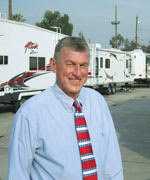 A pioneer in the industry whose RV dealership was a model for dealers nationwide passed away Friday (Jan. 10) at his home in Bakersfield, Calif. He was 71.

Mike Stier, who for decades owned Stier’s RV in Bakersfield, readily identifiable by its massive American flag, had suffered from cancer and the effects of treatment since 2005, according to reporting at Bakersfield.com.

Stier’s vast, 50,000-square-foot recreational vehicle showroom, opened in January 2000, dwarfs some basketball arenas. The facility, on 10 acres near the Bakersfield Auto Mall, was sold in 2004 to Camping World Inc., whose general manager ordered the 40-foot-by-70 feet flag lowered to half-mast in Stier’s honor.

He will be missed by his many friends and colleagues in the industry.

Mike Terlep, president of the Coachmen division of Forest River Inc., counted Stier as one of his best friends. The two met 30 years ago when Terlep and others from Coachmen flew to California to sign him up as a dealer.

The relationship grew and continued, and, “Coachmen was a big part of the new dealership. The new dealership he built in Bakersfield was a model dealership,” Terlep told RVBusiness. “Dealers from all over the country flew there to view it and get ideas.

“Mike had a larger than life presence about himself,” Terlep said. “He was one of the most positive, passionate people I’ve known.”

Terlep said Stier exhibited an incredibly high standard of integrity and respect throughout his life and career, and he demanded the same from the people who worked for him.

“He also was quite the risk taker and he wasn’t shy about getting after it,” Terlep said. “He was a Marine. He was incredibly patriotic. To me personally, he was a mentor and he was not only a best friend, he was like a brother. And frankly, Mike was like that to a lot of folks just because of his compassionate and giving spirit.”

Even after being diagnosed with cancer in 2005, Stier’s outlook was exceptional, Terlep said.

“I’ll never forget something that he said to me when he called me and told me about (the diagnosis). He said that he wanted his experience in fighting cancer to make him a better person,” Terlep said. “And I thought, you know, how many people are focused on that when dealing with that kind of news? That was the kind of guy Mike was.”

In the early 2000s, Stier’s RV was one of the top five RV dealers in California.

According to Bakersfield.com, Stier grew up in the Monterey County farm town of Salinas. As a high school student he ran two miles a day through a lettuce field to get to his 35-cents-an-hour job picking lettuce and broccoli. He boasted he could fill up a box of lettuce faster than anyone in his work crew. Later he sold sewing machines and televisions on a street corner.

Upon graduation in 1966, Stier served in the U.S. Marine Corps for three years, a deployment that included a year in Vietnam. Discharged from the Marines in 1969, he attended Hartnell College in Salinas but, finding his classmates in those difficult days less than friendly to veterans, left without graduating. As a result of that experience, he often professed admiration for “C” students and skepticism about the value of college. Nevertheless, he sent his daughters to university educations.

At age 24, Stier was hired by a camper-shell company and in 1973 was offered the chance to branch out on his own in one of two territories: Bakersfield or Las Vegas. He studied the markets, chose Bakersfield and was forever happy with his decision — although he would later enjoy frequent trips to Vegas. He set up shop in an old gas station at Terrace Way and Union selling camper shells, cab-over campers and similar products. In setting up his business, according to his wife Kathi Stier, he told the bank he already had the property secured and told the property people he already had bank financing lined up.

After selling to Camping World, he stayed on with the company for one transitional year. When he broke news of the sale to his top managers, he handed each of them a Rolex watch.

Stier is survived by wife Kathi, daughters Kaylee and Stevie, and granddaughter Addison. Services are tentatively set for Tuesday, Jan. 21, at the Bakersfield National Cemetery on East Bear Mountain Boulevard, near Highway 58.