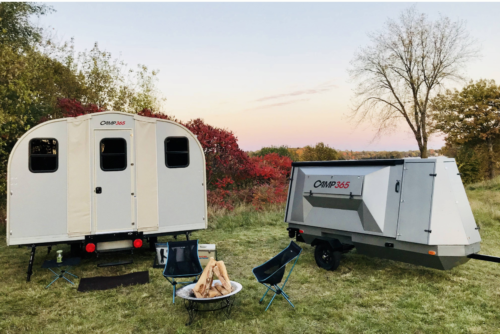 The manufacturers of Camp365, an adventure camper that defies description, are hoping their first-ever trip to the Elkhart RV Open House next week will accomplish its primary mission: to introduce a potential dealer base to its highly innovative travel trailer that packs neatly for travel and unfolds to a 700-cubic foot trailer at the campsite.

CEO Kevin McGregor said the nine-year-old company, headquartered in Minneapolis, Minn., is eager to welcome dealers to its Open House display on the west side of County Road 17, across the street from the entrance to Executive Parkway and the RV/MH Hall of Fame.

“We want a very limited dealer network, but really hand-selected people who can grow with the product — and many more of the cool products that are going to be coming out in the future,” McGregor told RVBUSINESS.com, noting that units are assembled in southern Iowa.

“We’re a hybrid. We’re not a pop-up. We’re not a teardrop. We’ve got a lot of everything in there and then a lot more. And it’s not niche by any means. It is for everybody,” he continued, adding that the trailer has has nine patents or patents pending. “Every time I want to put my finger on who our buyer is I say, ‘Yeah, right. Good luck.’ I mean, a lot of people love it because they don’t have to buy a new car to tow it, and then they still have tons of space so they can use it however and whenever they want.”

Folded down, the Camp365 is roughly the shape of a triangular prism that measures 15 feet, 4 inches long, 6 feet, 8 inches high, and 4 feet wide, making it not only aerodynamic for travel but also easily stored in a garage or shed. Since the base camper weighs less than 1,500 pounds, it can be maneuvered by hand and, as company officials like to say, the under 10-minute set-up procedure is “Grandma certified” due to its mechanical lift assist.

When fully opened, the Camp365 offers 7 feet, 6 inches of interior headroom along with enough space to accommodate the “entire offensive line of the Indianapolis Colts,” McGregor said — although that might be pushing the limits of the Camp365’s 2,200-pound GVWR.

Interior amenities include sleeping for up to six (options include bunk beds, full bed or queen bed), portable propane water heater/shower, shower system for outside use, and fresh and gray water tanks of 12 gallons each. The unit is made solar ready by Zamp Solar, and kept warm with a Truma VarioHeat propane heater.

An optional kitchen includes a two-burner, portable pullout stove that can be set up indoors or outside, and an energy-efficient DC-powered refrigerator/freezer accessible inside the trailer or outside with a slide tray. The Camp365 also offers an optional bathroom with a portable toilet and privacy curtain as well as an optional shower system that can double as a private changing area.

The trailer has a number of other options as well, including a Bluetooth speaker system, exterior clamshell-type canopy, exterior four-season add-a-room, and side carriers for kayaks, bikes, and paddleboards.

The unit is made of durable materials including a steel reinforced aluminum frame, composite insulation, and an aluminum alloy shell — no wood, canvas or rip-stop nylon. McGregor noted that an adjustable wheelbase extends from its standard four-feet wide to just under six feet for off-road conditions or storing in the garage.

After exhibiting the Camp365 at two retail RV shows earlier this year in Minnesota and Colorado, McGregor said interested dealers were vying to partner with them.

“We’ve got a number of them all over the country that are interested. Everybody keeps asking, ‘Hey. You coming down to the Elkhart RV Open House?’ Everybody wants to see, feel, and touch Camp365. They watched the videos and everything. It’s really good timing to be down in Elkhart . We’re excited to show everybody Camp365.”

He also invited dealers to the company’s website, www.camp365.com, for more information on the Camp365.