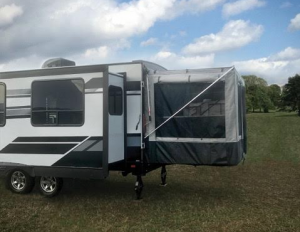 Carefree of Colorado’s new Carefree Retreat Tailgate Annex is “gaining attention in the RV industry,” according to a press release. The annex attaches to the back of a toy hauler trailer, fully enclosing the entire tailgate and giving RV owners more usable living space without upsizing their RV or affecting their towing capacity.

Vice President of Sales and Marketing Elden Wood noted, “What we aimed for with the Carefree Retreat is the easiest set-up in the industry. Aside from the extra space, we wanted to offer a flexible design. The walls of the Retreat can be configured three different ways, as a heavy-duty mesh, a clear plastic layer or a canvas privacy screen.”

Starcraft is offering the Carefree Retreat on its new GPS toy hauler, which was selected as a finalist for RV Business magazine’s RV Of The Year, based on design and engineering innovation and perceived impact upon the market

Jeff Kloska, general manger for Starcraft, said, “We listened to what customers wanted in their toy haulers and incorporated that into the GPS. More storage space, more living space and lighter towing is what they said. The Retreat adds the space while keeping the load light.”