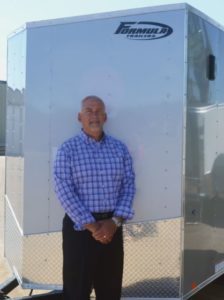 Formula Trailers will hire 45 employees to begin production the week of July 2 at the company’s 110,000-square-foot manufacturing facility with plans to hire 80 full-time employees over the next year. Formula Trailers will initially begin producing cargo trailers and auto haulers in both steel and aluminum, but the company will ultimately build a full line of trailers including motorcycle, snowmobile and high-end race trailers by the end of the year.

Troyer, president of Formula Trailers, stated, “Formula Trailers was started to fulfill a need for a new cargo trailer and race trailer offering not currently produced by our competitors. Competitors build what they want instead of what the customer wants and the market is signaling they won’t pay more for less value.

“There is a need for additional capacity to fill that void and focus on customers, providing competitive lead times. In an industry where dealer input is vital, I’m looking forward to re-establishing old relationships and making new ones.”

Troyer is a 27-year trailer industry veteran with experience from both the OEM and supplier sides. Troyer began his career at Haulmark industries Inc. where he held the title of warranty manager. Working with Matt Arnold’s father, he grew with the company and served as vice president of sales and marketing for 15 years.

Troyer and a business partner then purchased an aluminum and steel fabrication company that served the cargo and horse trailer industries. Troyer and his partner sold their company in 2016.