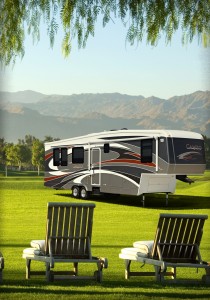 Millersburg, Ind.-based Carriage Inc. has been busy this fall with R&D and will be bringing several new Cameo floorplans and a completely revamped Royals International to RVIA’s 47th Annual National RV Trade Show in Louisville, Ky., according to new Carriage President Don Emahiser.

In fact, Emahiser reports, Carriage has put on a product development “blitz” this fall on its mainstream-priced Cameo line that has resulted in the recent introduction of a unique 37FB3 model and will continue into early 2010 with the fourth new Cameo floorplan in four months.

Staying ahead of the competition with respect to innovative floorplans is the goal, said Emahiser, adding that much of Carriage’s winter production has already been sold out, in part due to a strong performance at the Pennsylvania RV and Camping Show in Hershey, Pa., in September.

“We’ve become a much more nimble company in the past year and our innovation has flourished because of it,” says Product Manager Andy Wesdorp. “The cool-new-floorplan ambulance chasers are always hot on our tails, so with this blitz we expect to see great winter turns at the shows before any other manufacturer can react.”

The Cameo 37FB3 contains a motorhome-inspired, bath-and-a-half concept containing a large shower/vanity/closet bath in front with a half bath closer to the living quarters “so guests of the owners don’t have to climb through bedrooms and showers to get to a bathroom.”

Among the next new Cameos early this winter will be a “mid-length fifth-wheel with defined living zones.”

Also on display at Louisville will be the all-new, top-end Royals International fifth-wheel, which, although still in the $120,000 retail range, is positioned significantly lower in price for 2010 for a market that has, by and large, gone to more affordable products in the last year and a half. “The 41-year old Royals International product will reassert its status as the benchmark for high-end, full-time fifth-wheels while now appealing to a broader market of RVers,” Carriage’s management states in an Oct. 19 release.

“This Royals not only has the most striking visual appeal of any fifth-wheel on the market, both inside and out, but as is our practice, there is much more than meets the eye,” explained Product Manager Todd Schmitz, adding that construction and reliability were as much a goal as appealing styling.

The 2010 Royals features five industry-exclusive floorplans, including two involving Carriage’s full-wall slideout technology, along with two exterior paint choices, quartz countertops, a Carriage-exclusive dual floor system and a base MSRP of $123,000. “Also continuing in the Carriage tradition, every piece of wood from slideout fascias to tables and chairs has been milled, built and finished in our own wood shop,” says Schmitz. “Keeping this quality of build in-house has kept our great reputation flourishing over the years.”