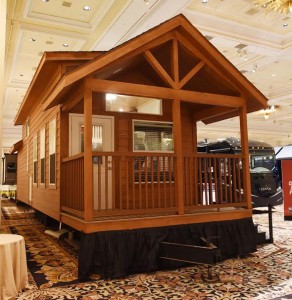 Champion Home Builders Inc. and Winnebago Industries Inc. partnered in a licensing agreement for a line of park model RVs.

Keith Anderson, the new president and CEO of Champion Home Builders Inc., has a specific goal in mind. He wants the Troy, Mich.-based producer of modular and manufactured homes, and park model RVs through its Athens Park subsidiary, to become “known as the best manufacturer in the industry from a quality and a customer satisfaction perspective.”

Anderson, who first joined the company’s board of managers in 2013, had been serving as interim CEO since January of this year until the interim tag was removed June 3.

While he said he was “just here to supplement the team,” Anderson was emphatic in saying Champion will be driven by “clear and concise objectives that all meet the company’s goals and, more than anything, meet our operative principles.”

“I can’t be stronger on this point: I definitely want to include in this discussion is how we’re going to conduct our work life every day,” Anderson told RVBUSINESS.com. “Anytime there are decisions needing to be made on how to do something and how to treat a customer and how to handle a situation with an employee, it’s all driven by what are our core operating principles tell us to do. Things like doing it right the first time and treating people the way you want to be treated. And making 100% sure the customer is satisfied. That’s really the big push I’ve been on the last three or four months both in my interim status and now in my permanent full time role.”

Anderson was bullish on the growth of the park model RV side of business, reporting eight of Champion’s 27 manufacturing pants are devoted to park models, 45% of which are used by campgrounds as rental units.

“We’re super excited about this growth in this segment of our business and I can’t say enough where I think the industry is going in this,” he said. “You have the geographic and demographic and economic drivers all pulling toward the need for more and more, I’m going to call it ‘housing alternatives,’ from small RVs to weekend getaways to cabins and cottages. If you look at all the macro trends we think this is an element of the business that’s going to grow and flourish for years to come.”

Fueling his excitement is Champion’s licensing agreement, announced in April, with Winnebago Industries Inc. for a line of park model RVs as well as the introduction of a new upscale “tape-and-texture” cottage model.

Anderson reported that a customer survey conducted around two months ago is figuring prominently in Champion’s operations going forward.

“We wanted to listen to what the customer wants, listen to what we’re doing well and, more importantly, what are we not doing well. Are we designing products that they need? Are we following up on our customer service orders in a prompt and satisfactory fashion? We had a gambit of questions,” he explained.

The survey results were tabulated and presented to each manufacturing plant as incentivized goals to be met by the end of the year. “Now they are highly driven and financially motivated to focus on these items,” Anderson said, adding one example of these goals has to do with the company’s ready-to-ship certification process. Now, there is at least one senior executive in every plant who has final approval before a home is deemed to have achieved the increased quality standard before it can leave the facility.