Editor’s Note: The wildfires in early July that tore through British Columbia and zeroed in on the 150 Mile House area subsided by the end of the month and the evacuation order was lifted. Officials, however, remained on alert in the area due to high temperatures in August and the chance of lightning strikes. 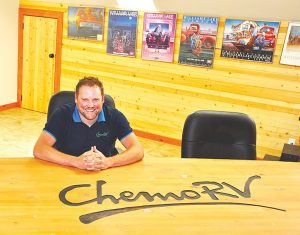 When wildfires broke out July 6 in 150 Mile House in Williams Lake, British Columbia, Chemo RV Sales and Service saw an opportunity to provide in a practical way.

With a 40-year history in the area, owner Jason Bell said he and his team dropped everything to help the community.

“It wasn’t even a question,” he said.

Despite potential danger, Bell and his staff pulled 20 travel trailers and motorhomes equipped with air conditioning into the fire department at 150 Mile House to provide temporary shelter for the truckloads of firefighters arriving to help subdue the fires. Chemo RV also donated two motorhomes to the British Columbia Ambulance Services to use as extra ambulances.

“We had first responders from all over, even from other countries, that gave up weeks of their time with their families to help protect our homes, businesses and families,” Bell said, whose company earned the B.C. Dealer of the Year distinction from the British Columbia RV Dealers Association in large part for its efforts during the wildfire. “The least we could do is help make them more comfortable after 16- to 18-hour days of fighting fires in the bush.”

When the town of Williams Lake was evacuated, Bell stayed in the area to help first responders. While his own town south of the area was not evacuated, food deliveries were stalled as every route to his town had been shut down. Since Bell was instrumental in aiding firefighters, he was allowed to travel through roadblocks to get food for the families in his neighborhood. 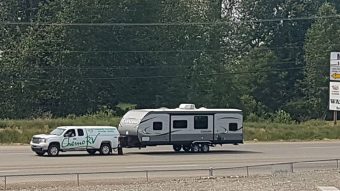 Meanwhile, every one of his staff members had been evacuated from their homes, and his RV dealership had to be evacuated for 20 days. Still, Bell was generous enough to keep his employees on payroll and ensure none of them had the stress of missing a paycheck during these difficult times.

“Chemo RV is a small dealership with a big heart,” said Shelby Cayen, an employee.

“We feel like we did nothing compared to the firefighters,” Bell added. “We will never forget what they did for us.”

To say thanks, Chemo RV has a free party for first responders planned for Oct. 14 with food, bouncy castles, face painting, live music and large raffle prizes. The dealer also made a commitment to donate $1,000 per RV sale from July through September. A total of $54,000 will be given to two fire departments and the Canadian Red Cross.

Chemo RV operates two locations in the Cariboo, including the Williams Lake store that opened in 1976, and a location in Quesnel that was added in 1989. In 2003 the business was named BC RV Dealer of the Year, and in 2004, it received the Canadian RV Dealer of the Year award.

Bell took over the company from his dad, Jack, in 2009. Chemo RV employs 14 staff at 150 Mile House and eight in Quesnel with annual sales of about 200 RV units per year between the two locations. Plans call for the building a new 25,000 square foot building at the Quesnel location.