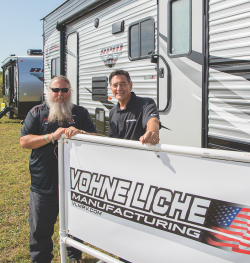 David Murray, COO for Chinook, told RVBUSINESS.com that the deal should be finalized by the end of February. Vohne Liche, which operated until last year as Riverside Travel Trailers, was founded in 2009 by President Kenneth Licklider and produces the DREAM and Riverside “loft” travel trailers along with the RPM toy hauler line that was introduced two years ago.

“We’ve been working for the past two months, so we’re coming into this with a head start,” Murray said. “We have been wanting to get into trailers for some time now. The timing was right with Riverside, whose production will be enhanced with a new line of trailers coming out in May as part of the acquisition. It was just a good fit for what we wanted to accomplish. The further we got into discussion, the more it made sense to combine the companies.”

Chinook, a storied name in the industry that closed down in 2005, was resurrected in 2013 by President and CEO Phil Rizzio, who owns Wagon Trail RV in Las Vegas, Nev., Creston RV in Kalispell, Mont., and Van City of St. Louis. The company opened production in October at a refurbished facility in Elkhart, Ind., rolling out its Sprinter Class B Bayside and Countryside, along with the new Glacier Class B-Plus and rear-entry Concourse. 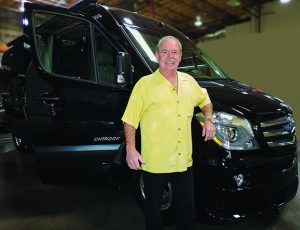 Vohne Liche Vice President Jerry Sell told RVBUSINESS.com that the company will continue to operate at its campus in Peru, Ind., and will be utilizing an existing 35,000-square-foot facility to increase production levels.

“We were just using one of the plants, which is 65,000 square feet,”  Sell said. “This will allow us to add new lines and boost our production capacities. Currently, we have plans to re-engineer five lines along with the launch of the new product in May.”

Rizzio stated in a press release that he is “thrilled to see the DREAM, Riverside and RPM brands become a part of the CMC Group, and is looking forward to an exciting 2018 year, including the introduction of other new trailer products.”

Licklider added that he is also “pleased to see the VLM brands be incorporated into a larger company with an experienced management team that would see further growth in the area and for the VLM people.”