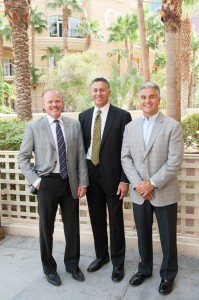 Grand Design RV is currently setting up shop with fewer than 20 employees in a 67-acre, 400,000 square-foot former manufactured housing plant near the Indiana Toll Road north of Middlebury, Ind.

“It’s something that we’ve had on our minds now for a lot of years,” reported Don Clark, president and co-owner of Grand Design who formerly served as president of Thor’s Goshen, Ind.-based Dutchmen Mfg. Inc. “You know, we’ve all had our own careers, and we always had this in the back of our minds — to take what we’ve learned in the industry and really do something special and unique that we could totally control. We knew it was going to happen, but we just didn’t know when, and we wanted the timing to be right.”

“We’ve all been talking about what brought us to this point,” added Ron Fenech, who exited his position as president of Thor’s RV Group in September of 2011. “And for me it was just time for a different chapter, as much as anything. I’m an entrepreneur at heart, and I really felt that pull.”

Clark and the Fenech brothers, also operating as co-owners, are preparing for the debut of their first line of mid-priced Solitude-brand “extended stay” fifth-wheels at the Florida RV Trade Association’s (FRVTA) Florida RV SuperShow in January with a startup staff that includes General Manager Marc Hauser, and Vice President of Service Operations Jerry McCarthy, both former Dutchmen executives.

In the big picture, meanwhile, they’ll operate from the perspective of a company in a post-recessionary market that’s inhabited by fewer dealers, but often by larger and more multi-store retailers.

“We’ll talk at our breakfast about the vision of our new company and hold a Q&A session,” said Bill Fenech, who resigned as president of Elkhart, Ind.-based Thor Motor Coach Inc. in mid-2011. “We’re going to be real strategic in who we sign — we’ve got to get dealers who buy into our philosophy of what we’re doing, and we want dealers who want to carry our full line of products.

All three, in turn, say their driving interest in launching Grand Design, for which a serious ramp up in production will begin in December, is to have the opportunity to build a privately held RV manufacturing firm in which they retain plenty of control.