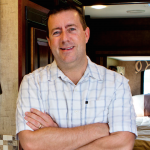 Clemens, who spent the past two years as national sales manager for Forest River’s Class C division, began his career on the production line at Wells Cargo Inc. before moving into a draftsman’s position for a modular commercial builder and ultimately serving as its head of engineering. He later served as a sales trainer for Thor Motor Coach Inc. before going to work as a territory sales rep for Forest River.

In a market in which Class C’s are posting solid growth across the board, including the high-end diesel-powered C’s in which Dynamax specializes, the company plans to roll out a Mercedes-Benz Sprinter-based model within the next couple of months.

“We’ll debut it officially at the fall show – the Open House,” Clemens told RVBUSINESS.com, noting that it will be distinct from the Sprinter-based Forester C-body already on the market from a separate Forest River unit. “The Dynamax brand carries with it a reputation as a higher-level product. So we’ll maintain that reputation. It will be a little higher price point. We’ll capitalize on that market.”