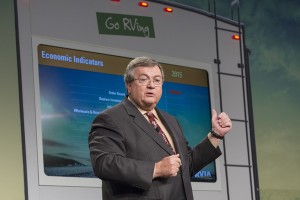 The recreational vehicle industry’s shipments will total 361,400 units in 2015, a 3.9% increase above the projected 2014 total of 348,000, Recreation Vehicle Industry Association (RVIA) President Richard Coon announced at the kickoff event to the industry’s annual trade show.

“This is a great time to be part of the RV industry,” Coon reported in a press release. “We’ve recovered from the recession with five consecutive years of growth, and we’re going to make it six in a row in 2015.”

The forecasted total for 2015 is more than double the industry’s 2009 recession low, and results from innovative RV designs, a deep-seated preference of consumers for the RV lifestyle, and an improving economy.

“Key economic indicators have been shifting in the right direction for the RV industry,” Coon said. “There’s still room for improvement in consumer confidence, wages and employment, and home sales, but the economy is strengthening in important ways for our continued growth.”

RVIA forecasts growth in every product segment of the RV market in 2015. Growth is expected to be strongest among conventional travel trailers and fifth wheel trailers.   Shipments of towable RVs will rise to 315,200 units in 2015, an increase of 4.1%, Coon told the gathering. Motorhome shipments are expected to grow 2.0% to reach 46,200 units in 2015.

“We’ve had a good year in 2014,” Coon said. “Our October numbers were up 30% from September and were the best October total we’ve posted in 38 years. We’re building momentum and there are great things ahead in 2015.”

The RV industry’s resurgence reflects the ability of manufacturers to quickly deliver new features and options that appeal to changes in the marketplace.

“We’ve done a great job getting consumers that right mix of features and price,” Coon said. “We’re going to have stay smart and fast in the years ahead to reach our potential.”

Coon emphasized that great products are no guarantee of success.

“Achieving the kind of sales and profits that are within our grasp will require continued investment in our world class marketing and public relations efforts,” Coon said. “We need to cement our status with current owners and traditional buyers while reaching out to nontraditional buyers who would enjoy the RV lifestyle.”