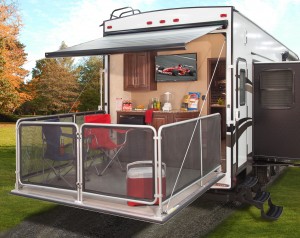 Keystone RV Co.’s Cougar division announced the introduction of its ninth new floorplan in recent months with the launch of the new 338PAT featuring an “industry-first party deck” for the mid-profile fifth-wheel segment.

The Goshen, Ind.-based builder reported in a press release that the 38-foot Cougar boasts a huge ramp deck in the rear of the coach. The spring-assisted ramp easily opens to create an 8-foot-by-11-foot party area equipped with 40-inch TV and entertainment center, outdoor refrigerator, storage, second awning and side rails.  The 3-foot area immediately inside the deck can be used to store bicycles, camping gear or other bulky items when in transport.

“With the growing popularity of RVs and the resurgence of younger buyers into the marketplace, the need for fresh, innovative ideas has become more important than ever,” said Cougar product manager Jeff Kloska. “The new 338PAT will appeal to families with children as well as active couples. This floorplan is loaded with the features that have made Cougar the best-selling fifth-wheel, according to Statistical Surveys Inc., for two straight years.”

The 338PAT is equipped with three sliderooms — one in the bedroom and two in the living/kitchen area—resulting in an increased amount of living space. The executive island kitchen features solid-surface countertops, stainless steel sink with pull-out faucet, cityscape cherry cabinetry, brick backsplash and built in wine rack. Full-width windows above the sofa/kitchen slide let in an abundance of natural light while the flush-floor mid-deck includes a bathroom with 60-inch residential shower, full walk-around orthopedic bed, full height wardrobe and washer/dryer prep.

“Cougar dealers have come to expect the newest and most innovative designs,” states Kloska. “By continuously updating our floorplan mix, our dealers will stay two steps ahead of the competition while offering the consumer floorplans they cannot find anywhere else.”