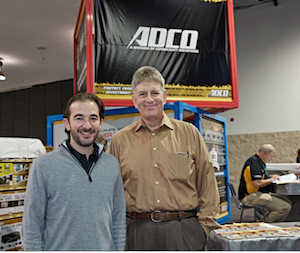 Making their first joint appearance under the Covercraft Industries LLC banner at the 2017 NTP-STAG Expo were representatives of Pauls Valley, Okla.-based Covercraft, a 52-year-old supplier of automotive custom-fit vehicle covers, and ADCO Products Inc., a 62-year-old firm marketing a variety of RV covers out of Valencia, Calif. Their appearance follows the surprise Dec. 22 announcement that ADCO had merged its brands and identity into the Covercraft fold.

Front and center at the NTP-STAG show, held Jan. 30-31 at the Anaheim Convention Center, were Covercraft President Mark Korros and former ADCO President Morgan Ein, now vice president of sales and marketing for Covercraft and general manager of Covercraft’s RV division. Also playing a key role in senior management of the 650-employee company going forward is Century Park Capital Partners’ Guy Zaczepinski, now a co-managing partner and chairman of Covercraft’s board as an equity partner in the conjoined company.

Plans call for ADCO to continue to service its existing customer base under the ADCO and PCI brand names as a unit of Covercraft, which, in turn, is known for its SeatSaver, LeBra and Colgan Custom brands. Sales and management team members for ADCO — official licensee for Winnebago-branded covers — are to transition into similar roles in a merged firm headquartered in Oklahoma with the RV unit retaining its Southern California location.

Curiously, the two companies were located next door to each other in Northridge, Calif., from the early 1980’s until about 1993 when Covercraft moved to Oklahoma in search of skilled labor and moderate wages, explained Korros and Ein. “You’ve got a 50-year old company and a 60-year-old company, both father-and-son built with a lot of similarities and with the same type of culture, value proposition and integrity,” said Korros. “It’s a wonderful fit, not only from the outside combining these premier brands, but from the inside in terms of the whole commitment of how to do business. Even the account structure has a lot of similarities.”

“This was two family-run, protective cover companies that had a gentlemen’s relationship and didn’t compete with one another,” said Ein, whose father, Alan, recently stepped away from active duty in the firm. “And here we are ‘X’ number of years later joining forces to create the world’s largest protective cover company.”

So, what messages are Korros and Ein transmitting to the North American RV dealer body over the next year?

“Basically,” said Ein, “the merger from the dealers’ standpoint is extremely positive. ADCO is going to be able to carry more inventory and introduce more products. In other words, our pipeline for innovation and product introductions has never been richer as a result of this recent acquisition. And we want to make sure everybody understands it’s the employees running the business with the same values, and there’s just all these additional benefits now to bringing Covercraft in.

“So, there’s more capital to buy more inventory, more product development,” added Ein, who will also continue to oversee sales of ADCO’s PCI line of lawn and garden protective covers. “They have an arsenal of outdoor fabrics that have been tested over time to be of the highest quality, to last the longest outside, etc., and now we have access to that portfolio of outdoor fabrics to enhance our offerings. So, I would say those are the biggest benefits that U.S. dealers and Canadian dealers will see.”

Next, said Korros, Covercraft Industries needs to better educate consumers about both the Covercraft and ADCO-branded products. “As the industry leader, we have an obligation to build the industry, not just build our sales,” said Korros. “So, educating the consumer on the purpose and the value of our products and on what our products can do to preserve their toys, their lifestyles, their investments, and doing it in a way that they have confidence is ‘Job One’ because they’re buying the best products available on the market from Covercraft Industries.”