The Canadian Recreational Vehicle Association (CRVA) reported that the total combined RV wholesale shipments into Canada for the 12 months, ending Dec. 31, increased by 28.37% over the same period in 2016.

CRVA’s wholesale shipments surpassed RVDA of Canada’s reported retail activity in 2017 in every category. Total shipments combined were 54,300 against RVDA of Canada’s retail total of 49,114 indicating that inventory levels are increasing in Canadian RV dealerships. “Canadian dealer inventories had been considered to be low so this is viewed to be a good statistic,” the release stated.

The Canadian RV Industry enjoyed a relatively stable Canadian dollar in 2017 but according to the Business Development Bank of Canada, there are three factors currently in play when forecasting the strength of our dollar in 2018:

• Oil and gas industries represent about 10% of Canada’s economy. Energy products, largely oil and gas, currently account for about 14% of our exports, but their share was as high as 24% in 2014. The demand for oil-related products (priced in U.S. dollars) creates demand for the Canadian dollar, and the higher the oil price, the more Canadian dollars are in demand. This phenomenon explains a good portion of the volatility in our exchange rate vis-à-vis the U.S. dollar.

• Interest rates: Another source of strength for the dollar last year was Canada’s surprisingly strong economic performance, along with two interest rate hikes by the Bank of Canada. Since the summer, we’ve seen stronger growth in the U.S., while Canada’s economic growth has slowed. A new tax plan approved by Congress just before Christmas will further stimulate the U.S. economy and encourage the Federal Reserve to continue with rate hikes in 2018.

• NAFTA’s Uncertainty: The U.S. is Canada’s most important trading partner, accounting for over 70% of our exports of goods and services. The uncertainty will not go away until a deal is done or NAFTA collapses. The longer the negotiations continue, the greater the uncertainty and potential for a negative impact on the Canadian dollar becomes.

“On a bright side, we have seen impressive attendance and retail activity numbers during most of our Canadian RV Shows thus far in 2018 and are inspired by the higher shipments of folding trailers and small lightweight RVs, ” said Shane Devenish, CRVA executive director. “Go RVing Canada’s marketing programs are getting the desired attention from younger consumers and first-time buyers like in the United States. 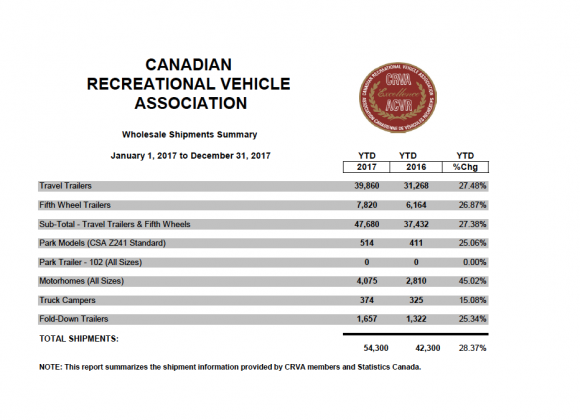