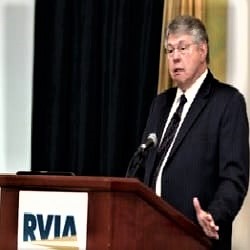 Independent RV industry analyst Richard Curtin reconfirmed an earlier projection in the Fall edition of RV RoadSigns, citing a “modest cyclical decline” for the remainder of 2019 and into 2020 with the largest sustained falloff occurring in the Class A and C motorhome sectors.

“While the sharpest declines are likely to have already occurred, the data does not signal renewed shipment growth before the end of 2020,” he said, citing that shipments are expected to decline 17.1% this year to 401,200 units while the industry will incur a 3.5% pullback in 2020 to 387,400. “Conventional and fifth-wheel travel trailers are expected to account for 87% of all RV shipments in 2020, the highest proportion ever.”

Curtin, who serves as director of Surveys of Consumers at the University of Michigan, pointed to several key economic indicators that will dictate a “cautious approach” by consumers and dealers moving forward.

“The falloff will be moderated by continued growth in wages, employment, and low inflation,” he stated. “Nonetheless, small increases rather than declines can be expected in unemployment and inflation by the end of 2020. While interest rates are expected to decline, rate cutbacks have been described by the Fed as a cautious response to potential economic weakness. RV dealers and consumers are likely to adopt that same cautious approach.”

He emphasized that the current decline would not mirror previous dropoffs, offering, “For both dealers and consumers economic security is a top concern, which will help the RV industry avoid the negative impacts from dealer closures and consumer sales of their RVs as in past downturns.”

Curtin surmised that a key component for the industry will be its ability to accurately manage inventories, gauging levels by analyzing future prospects versus the current rate of sales.

“While national economic conditions cannot be controlled by the RV industry, the same is not true for inventory levels,” Curtin said. “Dealer inventories should not be judged by the recent pace of sales, but should be determined by the future expected sales pace.

“Moreover, inventory management should not be entirely left to dealers since larger than appropriate inventories cause larger drops in subsequent shipments which directly impact manufacturers,” he related. “While the urge to book another shipment is strong, manufacturers risk even sharper, and more costly, future cutbacks in production.”

In addition, Curtin noted there will be “lingering units on dealer lots that may ultimately be sold at steep discounts,” competing with newer models from the same manufacturer.  “Each manufacturer’s future profitability depends on maintaining a healthy dealer network,” he concluded.