By: RVBusiness|Published on: May 30, 2012|Categories: Today’s Industry News| 0 comments

Editor’s Note: The following story appears in the Summer issue of “Roadsigns,” a publication of the Recreation Vehicle Industry Association (RVIA), based on data collected by Richard Curtin, director of the Surveys of Consumers at the University of Michigan. He has conducted research on the RV market since 1979 for the RVIA.

RV shipments were 71,400 units in the 1st quarter of 2012, posting a 9.7% year-to-year gain and the most units shipped since the 1st quarter of 2008. Nearly the entire year-to-year gain was in conventional and fifth-wheel travel trailers. Shipments of Class A and C motorhomes were largely unchanged from a year ago as were folding camping trailers. Despite the uneven gains in the past year, overall shipments will continue to slowly rise in a challenging economy. 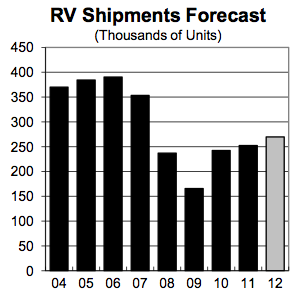 The outlook for continued growth in RV sales is based on slow but consistent gains in jobs and incomes during the balance of 2012. Improved credit conditions and low interest rates will also support the expansion of RV sales. Stabilization of home prices as well as initial gains in home construction will begin to turn the past negative drag of the factors to a small positive. On the negative side, uncertainty about future taxes and federal spending is likely to moderate sales toward the end of the year and in early 2013.

Although the economy is expected to slowly expand in the year ahead, no forecast can be made which ignores the potential that some event could derail the recovery. How can firms plot a profitable course in such an uncertain sea? There is no foolproof method. Judgments need to be made about the potential for each major possible event, and if that event took place, how it would affect sales. Perhaps the largest uncertainties involve the extension of the tax cuts to bridge the fiscal cliff at the start of 2013 as well as potential contagion from the European crisis. Although this forecast assumes that all the tax cuts will be temporarily extended following the election, the delay will temper sales gains at the turn of the year. Growth in shipments will remain subdued until mid 2013 when a more permanent solution is likely to be adopted. Unfortunately, tax and spending policies are just one of the uncertainties we now face. Firms need to anticipate how these potential events may result in either sales increases or sales declines, and how they could profitably and quickly adjust their operations in response. In this age of uncertainty, contingency planning will help determine a firm’s ultimate success.