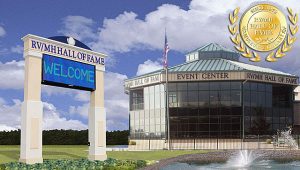 The deadline to submit nominations for the RV/MH Hall or Fame’s Class of 2018 is less than 30 days away.

“The deadline for nominations for the Class of 2018 is Oct. 31, so we are encouraging all those who plan to nominate a candidate to get their paperwork submitted as soon as possible,” said Hall President Darryl Searer in a press release. “The Hall welcomes nominations from all RV and manufactured housing sectors, such as, manufacturers, dealers, campgrounds, housing communities, suppliers, user groups, trade media and associations.

“Also, the Hall is now accepting nominations from the Canadian RV/MH industries. The nominating committee is especially interested in receiving nominations for deserving early pioneers who may have been forgotten, passed over or overlooked in the past.”

Nomination forms and instructions are available for download on the Hall’s web site, www.rvmhhalloffame.org/pages/nominations.cfm.

According to the guidelines, anyone can nominate a person to the Hall of Fame that meets the eligibility requirements.  The only people who may not be considered are those who currently serve on the Hall’s Selection Committee.

To be eligible the nominee must be, or have been, an active participant in any segment of the recreation vehicle, campground or manufactured housing industries for a minimum of 25 years.

Also, the nomination form must be filled out in its entirety and must be accompanied by three supporting letters (no more, no less) that meet the Hall’s guidelines for these letters. Incomplete nominations cannot be considered. If the nominee is not selected within five years, he or she remains eligible only if the nomination is resubmitted and refreshed with additional information.

When evaluating a potential nominee, the selection committee will consider the nominee’s overall contributions to the good of the industry, to include both his or her positions, accomplishments and innovations on the job as well as volunteer work both inside and outside the industry, with special emphasis on volunteer work done on behalf of state and national associations and owner groups, the Hall of Fame itself and other industry-related organizations and causes.

If a completed nomination form and three properly-prepared seconding letters are received by Oct. 31 of any year, the nominee will be in the pool of candidates considered for the following year’s class and for four years beyond that if not selected that year.

The Hall’s Selection Committee will announce its selections in January and those chosen will be inducted at the Hall’s annual Induction dinner in August. The Hall’s bylaws allow for up to 10 inductees per year.

Searer said, “The Selection Committee is made up of an equal number of members of the RV and manufactured housing industries, and members will only vote on nominees from their respective industries.”

Once the nomination form and supporting letters have been completed, the nominations may be submitted by mail, in person at the Hall, or by fax at 574-293-3466