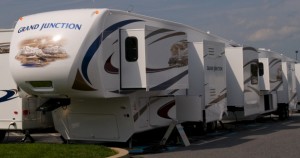 Dutchmen Manufacturing Inc. is hosting dealers from across the U.S. and Canada at its headquarters this week in Goshen, Ind., to unveil its entirely new line of products. The event marks the beginning of what is being called the “New Dutchmen.”

Since taking over as president of Dutchmen in April, Don Clark and his new team have completely overhauled the company’s internal structure as well as product line-up.

“Our product teams have done an incredible job creating the strongest line up of products in the history of our company,” said Clark.  “The term “New Dutchmen” represents a reshaped, refocused company that has dialed in our product offering.  Our brands are designed to allow dealers to not only compete in a challenging market but dominate each major market segment in the industry.

”They are focused on hitting the meat of the market with the best selling floorplans, innovative features and unbelievable eye appeal.  Even though we have added features and enhanced the value of each brand, we have actually lowered the dealer price of most of our brands.  We have placed our dealers as well as ourselves in a position to gain serious market share.”

Clark said the new product debut and open house is the first chance for many dealers to see the new products. The company gave a sneak preview of some of the product changes when it introduced the new Grand Junction at Septempber’s Pennsylvania RV and Camping How in Hershey, Pa.

This week, Dutchmen will introduce an all new line-up of Dutchmen, Four Winds, Denali, Aerolite, Kodiak, Colorado and Grand Junction products to its dealers.

According to Clark, RV dealers have been waiting for a company that offers something new and exciting.  The support Dutchmen has been getting from its dealers and prospective dealers has been almost overwhelming.

The Dutchmen “New Product Preview and Open House” runs through the end of the week.

New models will also be on display at the Dutchmen offices until mid-November, then at the 47th National RV Trade Show, Dec. 1-3, in Louisville, Ky. Dealers interested in seeing the new models between now and the Louisville Show may contact Dutchmen for an appointment 574-537-0600.