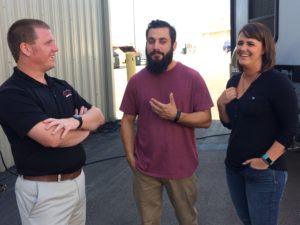 During a break in between filming the “Going RV” television show, Rusty Eckstein of Mount Comfort RV in Greenfield, Ind., and customers Miguel and Tasheana Hanza share a laugh.

When Rusty Eckstein, the general manager/owner of Mount Comfort RV in Greenfield, Ind., suggested to two of his repeat customers, Miguel and Tasheana Hanza, that they once again apply to be on the television show “Going RV,” they all figured they had as much of a chance of appearing on the program as winning the lottery.

After all, when the Hanazas bought an RV from Eckstein years earlier, they also tried to get on the show but, for whatever reason, they weren’t selected. However, the second time must be the charm because this time the show’s producers picked them.

With its seventh season set to air this July on the Great American Country network, the show features RV buyers as they visit a dealership to look at a few RVs — usually three — then choose the one they think fits their needs best.

In the episode with Eckstein and the Hanzas, the couple looked at a North Trail 33BUDS and a Salem Hemisphere 372RD before ultimately deciding on a Coachmen Chaparral 370FL. Miguel Hanza said the 42-foot fifth-wheel is best classified as “glamping” and a far cry from their days of tent camping.

“It’s basically like ‘House Hunters’ for RVs,” Breana Schiding, one of the show’s producers, told RVBUSINESS.com. In fact, Schiding, who’s based in Knoxville, Tenn., said “Going RV” traces its roots back to “House Hunters,” the popular real estate show seen on HGTV, when an episode featuring RVs proved popular. Both shows are produced by RIVR Media for Scripps Networks Interactive. 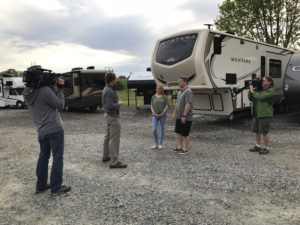 Over the years, the show has featured 68 dealers and their customers from across the country. The television crew usually spends two days shooting at each dealership. Each day can last 11 or more hours, but Heather Senn of Dixie RV in Defuniack, Fla. – who is a bit of a regular on “Going RV” having been featured on three episodes – said the benefits to the dealership outweigh the effort.

After an episode airs, Senn said the dealership typically hears from customers who saw it. “Oh my gosh! I saw you on the TV show!” are often the first words out of their mouths once they recognize her, she said.

“It brings them into our dealership,” Senn said. “Dealers should do it because it’s really good publicity.”

Eckstein said the crew makes the process easy for the dealership, but they insist that the customers are the stars.

“It’s a fun thing to do. It’s fun for your customers to see themselves on TV,” he mentioned.

Hope Lichtsinn of Lichtsinn RV in Forest City, Iowa, said working with the “Going RV” crew was easy. Producers contacted them in advance so they knew exactly what to expect, she explained, and crew members were considerate of dealership traffic and property.

“We had unseasonably cold weather and lots of rain while they were here and they took everything in stride and made it work for both them and us,” Lichtsinn told RVBUSINESS.com. “When they left, we invited them back anytime they like.”

Those sentiments are familiar to Schiding, who said “We’ve never had anything but positive reviews from dealers.”

Reed Burkholder of Lichtsinn RV in Forest City, Iowa, and customers Linn and Ann Bishop are filmed for a “Going RV” episode.

“They know what the show is and they know who will be good on camera,” said Schiding.

That’s exactly how the Hanzas ended up on “Going RV.” Miguel Hanza said going on the show for their second RV purchase was better, because they were seasoned RV buyers at that point.

“We had a good idea what was really important to us. We have no problem talking about what we do and don’t like,” he said.

The show appeals to everyone from veteran RVers to newbies trying to figure out if the RV lifestyle would be right for them, Schiding related, and many people have told her the show convinced them to buy an RV.

“They get this really broad look at what the RV world is all about,” she said, adding that the show always ends with a “hero shot” at a campground where the family is featured enjoying their new RV. And whenever the show crew visits a campground, Schiding pointed out, word quickly gets around that “Going RV” is on site.

“The crew gets treated like some kind of celebrities at these campgrounds. People know who we are and what we do,” she said.