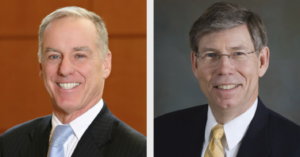 As an encore to what was a lively panel discussion in 2016, the Recreation Vehicle Industry Association (RVIA) announced today (April 10) that former Florida Congressman Bill McCollum and former Vermont Gov. Howard Dean will lead a joint presentation on the country’s political climate during the Committee Week and Advocacy Day event, which is June 3-7 in Washington D.C.

A one-time presidential candidate, Dean also is a former head of the Democratic Party, while McCollum, a Republican, led the impeachment efforts of former President Bill Clinton. In 2016, the two clashed on a variety of topics and, given the country’s current political divide, it is expected they once again will offer a spirited exchange from both sides of the aisle.

Following two-plus days of RVIA committee meetings, their discussion keynotes “A Capitol Evening Reception & Dinner” and takes place the evening of June 5 at the Smithsonian’s Museum of American History.

In addition, RVIA announced that other presentations will be made by Bob Parish, RVIA chairman, and Frank Hugelmeyer, president of the Reston, Va.-based association, as well as Mike Allen, founder and executive editor of Axios, a new media company whose stated mission is to “deliver vital, trustworthy news and analysis in the most efficient, illuminating and shareable ways possible.” According to RVIA, Allen will offer his “non-partisan, energetic and up-to-the-minute insider perspective on the political issues of the day, the Trump administration, the Republican Congress, and building a business in an unsteady economy.”

The five-day event concludes with the 17th Annual Advocacy Day on June 6, in which participants meet with congressional leaders and federal agencies, to be capped that evening by the 5th Annual RV Caucus reception – this year to be held on the U.S. Senate side – where RV industry executives will mingle with over 200 guests, including Members of Congress, senior Hill staff, federal agency representatives and allied industry colleagues.