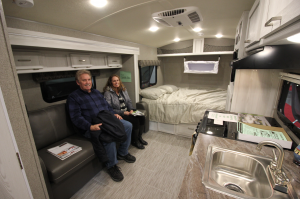 Apparently only a major snowstorm could prevent another record-setting crowd at a consumer RV show this year. Significant snowfall on four of the five-day Detroit Camper & RV Show kept people at home as officials reported a 25% drop compared to the previous year’s show.

Hosted by the Michigan Association of Recreation Vehicles and Campgrounds (MARVAC), a little more than 20,000 people attended the 52nd Annual Detroit RV Show, which was Feb. 7-11 at the Suburban Collection Showplace in Novi, Mich.

Despite the drop from 2017’s record-setting gate, MARVAC Executive Director Bill Sheffer said dealers reported a decent amount of business nonetheless – suggesting that only serious buyers braved the storms while the snow kept the tire-kickers at home.

“That’s exactly what dealers said,” Sheffer told RVBUSINESS.com. “In fact, they said they had better customer interactions than they would have had otherwise. Usually it’s so busy that dealers have a hard time getting to everyone, or spending enough time with the people they would like to.”

Going forward, Sheffer said MARVAC is hosting four more consumer shows across Michigan over the course of four consecutive weekends in March and – barring another weather event – he fully expects each to be successful in terms of both attendance and business.

“Absolutely,” he said. “Everything is pointing in the right direction – good economy, fuel prices and interest rates are holding steady, and the popularity of the RV lifestyle has never been better.”