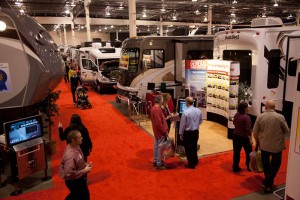 Traffic was steady at the Detroit Camper & RV Show

If the 46th Annual Detroit Camper & RV Show was any indication, the RV industry could be on the brink of a significant turnaround. That was certainly the buzz on Sunday (Feb. 12), the finale of the Detroit Show, held Feb. 8-12 at the Suburban Collection Showplace in the Detroit suburb of Novi.

The Detroit Show was literally packed with buyers and prospects to the extent that people couldn’t get through the aisles in many cases. And, as a result, the sponsoring Michigan Association of Recreation Vehicles & Campgrounds (MARVAC) was able to counter the attendance setback it had experienced during a Friday night snowstorm that clearly had discouraged some area residents from heading out to Novi.

“We were excited by the higher-than-usual Sunday traffic that actually allowed us to set a new attendance high for a five-day Detroit Camper & RV Show,” MARVAC Director Bill Sheffer told RVBUSINESS.com. “We were up 2% over last year, ending up with just under 19,000 attendees. A straw poll of dealers following the show and during move-out showed all dealers reporting very good to great sales during the show. Overall, the show was a great success for MARVAC.”

Indeed, most agree, the atmosphere was rather infectious.

“We probably had the best show that we’ve had since the 1990s,” says Jerry Bridges, owner of Lloyd Bridges Traveland, located on I-94 in Chelsea, Mich., between Ann Arbor and Jackson. “That’s my guess. We had 20 units there, and we landed 30 solid deals and five or six possible sales, and we have a ton of residual business after the show. So, we did pretty good for the amount of units that we had there.”

Still, neither Bridges nor his retailing peers are ready to declare the recession over – not by a long shot.

“In my opinion, it’s hard to put a pencil on exactly why things went the way they did,” said Bridges. “But I think it’s a combination of a few different factors. I know that unemployment in Michigan has gone from 11% to 9%. I also know that Chrysler and Ford workers have gotten themselves some bonuses lately. And I know that there’s been a period of a few years where people probably would have liked to trade, but didn’t. They held off until they’d seen some signs of improvement around here. So, I definitely think that had a lot to do with it.”

Also playing a role, he maintained, was the marketability of several product lines that Lloyd Bridges Traveland carries, including Heartland’s North Trail towables and Keystone’s Montana, Cougar and Raptor lines.

Adam Sobczak, a general manager for a ten-store network operated by Grand Rapids, Mich.-based TerryTown RV SuperStore, also had good things to say about the Detroit-area retail event. “The show has been excellent,” said Sobczak. “We’ve seen a good amount of traffic – some great buyers, a lot of younger buyers coming back out and otherwise buyers across the board, from motorhomes to stick-and-tin travel trailers.”

What does this all indicate about U.S. economic turnaround in Sobczak’s view?

“Well, I don’t know if we’re going to have an economic turnaround until we decide who’s going to be president,” Sobczak told RVBUSINESS.com. “But, obviously, we’ve seen some strength this year in the economy as far as the RV sector. But we (TerryTown’s operation) haven’t seen much of a downturn over the last few years, even though the industry has seen a downturn. You know, we’ve been pretty strong.”

General RV Center President Loren Baidas, whose 10-store company occupied nearly a third of the show’s square footage, says traffic has definitely been up at Novi and elsewhere. “We’ve seen a significant increase in interest from customers this show season compared to last year and the years before,” said Baidas, whose 50-year-old firm is based in the nearby Detroit suburb of Wixom. “It’s been that way everywhere from Florida to Ohio to Michigan. Every show that we’ve done so far, we’ve had a great reception from our customers.”

Overall, Baidas takes a relatively conservative view of this upbeat trend for the short-haul, but a pretty optimistic stance for what it may signal over the long run.

“You know, our sales are good,” he said, “but the way I look at it, the interest from customers is more long term. So, these are the people who are looking to buy not just this year, but also next year and the year after that. They’re getting the idea that this is what they want to do and that this is something they can afford. You know, it’s going to take a little while to see that snowball into the industry taking bigger steps forward. But the interest is definitely there that wasn’t there a year or two ago.”