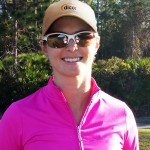 Elkhart, Ind.-based supplier Dicor Corp. will be one of the sponsors of LPGA golfer and South Bend, Ind., native Katy Harris this year on the LPGA Tour. An outstanding high school and college golfer, Harris has a remarkable comeback story after a hand injury sidelined her golfing career for nearly a decade.

“We’re pleased to support such a gifted athlete and with such a remarkable story,” said Gregg Fore, president of Dicor, in a press release. “Katy’s living a dream some would not have pursued as a 30-something mother of two in a highly skilled and competitive sport. It takes a little something extra to make that work, and that certainly speaks to the values we have at Dicor.”

LPGA data indicates that its fans are 282 times more likely to travel by RV so it is no surprise that the industry’s “Go RVing” campaign has also been a sponsor of Harris. “As a company dedicated to making RVing a better experience for all concerned, we want to be where the RVers are and involved in the kind of recreational activities they enjoy,” said Fore. “It’s fitting for Dicor to be part of this through this inspiring player.”

Harris had a standout high school and amateur career, including two individual Indiana state high school titles, the Indiana State Open Champion title, and the Indiana State Amateur Champion title. She attended LSU on a full golf scholarship where she recorded 20 top 10 finishes, and was named first team All-American in 2001. She was also named NCAA Woman of the Year for the state of Louisiana in that same year.

During the SEC Championship her senior year, Harris injured her right hand and required two separate surgeries to repair the instability in her hand. However, post-surgery she found that she still could not play without constant pain and decided to take her life in a different direction, becoming a technology professional at ExxonMobil.

In 2010, Harris began playing nine-hole outings as some recreational time for herself and, surprisingly, she found that the injured hand no longer bothered her. Harris decided to get back to her dream of playing on the LGPA tour and returned to action, finishing second in the Texas Open, her first competitive event in nine years. Since then, Harris has won a Cactus Tour event (2010), a Canadian Tour event (2011), earned conditional LPGA status for 2011, won a LPGA Symetra Tour event (2013), and earned LPGA status for 2014 and 2015.

After attending the PGA Merchandise Show in Orlando, Fla., she will go to Ocala, Fla., for the Coates Golf Championship Jan. 26-31, and then to the Bahamas to compete in the Pure Silk Bahamas LPGA Classic at Paradise Island, Bahamas, Feb. 5-8. For more on her story, and to follow her progress, visit www.katyharrisgolf.com.

To learn more about Dicor Corporation and its affiliated companies, visit www.Dicor.com.