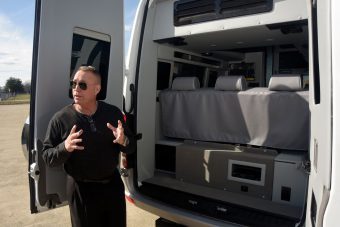 There’s an appreciable sense of pride as Darryl Connors strides through the Dolphin Motor Coach manufacturing facility. He stops on occasion and identifies the automotive grade craftsmanship that distinguishes the company’s fleet of Class B coaches — touches like ultraleather, double-stitched seats, a fade paint process on the exterior that transitions from pearl white to silver, residential-style vinyl plank flooring, and a secondary air system that uniformly cools the entire coach.

Connors, who serves as president and CEO for the startup, slides open the door to a CapeCod model outfitted with Dolphin’s Aztec interior decor and points out the solid wood treatments throughout the coach, including the dash and doors. The real eye-catcher is a large wardrobe across from the entry door sporting a hand-dipped, high-gloss buff finish achieved through hydrographics that creates a lacquer-like sheen on the wood.

“The most expensive thing in the coach is the wood,” noted Connors, who previously owned American Vans and American Specialty Trucks that built licensed vehicles for car dealers, NASCAR, Orange County Choppers and the Collegiate Licensing Corp. “It’s become one of our signatures.

“This is all part of what we call our SmartCamp Technology, which is applied to everything we do,” he explained. “It’s comprised of technology — components like our wiring harnesses and the ‘No Dirty Water’ water purification system and a battery systems that increase dry camping time — along with overall luxury, including high-end cabinetry. We also concentrate on the touring aspect because we found out over 50% of Class B buyers don’t sleep in the coach. They want a vehicle that is comfortable and easy to drive.”

Since opening its doors in February of 2017 at the 30,000-square-foot facility on the east side of Elkhart, the company has “successfully grabbed the attention of that high-end buyer,” according to Connors, along with a growing group of select dealers. “The high end is the sweet spot in the Class B segment,” he said. “We are building a lineup that fills all those niches on the upper end, which is highly segmented. 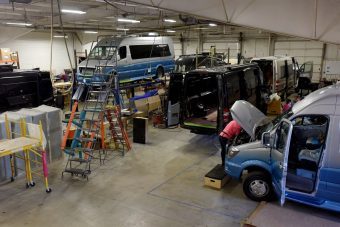 “Offering a full line also gives our dealers more opportunities, allowing them to carry one company’s brands versus stocking three or four models from different OEMs. They can deal with one company and one service department. We have partnered with the top-selling Class B dealers, including Lazydays, Giant RV and Desert Autoplex RV, and are represented in California, Arizona, Texas and Florida — all the hot market areas. Currently we have around a half dozen multilocation dealers.”

With demand for product growing, Connors reported that Dolphin Motor Coach has transitioned into expansion mode, acquiring a second 25,000-square-foot factory in Elkhart that will effectively escalate production across all its lines.

“We’ll be building our National Traveller and Day Traveler in the new building,” Connors said, adding that the OEM currently employed 50-plus workers. “In addition to increasing capacity for those brands it will also allow us to up production on our other models at our current facility.”

Connors related that down the road the builder will also be bringing Class A and Class C models into the mix. “When we began the process, we established a five-year business plan which calls for us moving into the other segments of the motorhome industry,” he said.

Working Through Some Growing Pains

Connors acknowledges there have been some hitches along the way, most notably a shortage of Sprinter extended chassis used on all the company’s models except the National Traveller which is based on the Ram ProMaster.

“Sprinter got sucked into the emissions issue with German diesel engines,” Connor explained. “Other companies had chassis in stock, but being a startup we were without product for nine months.” 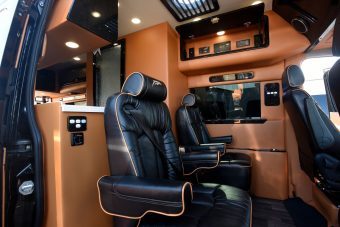 The company, which originated as Grand Coach, also recently initiated a name change designed to leverage the notoriety of the Dolphin brand. “It’s a very iconic name with a 54-year history, and there is tremendous brand recognition with Dolphin,” Connors said, noting that he was able to acquire several high-profile brand names from National RV Inc., a West Coast manufacturer that folded during the recession. “Dolphin is our flagship line, and we wanted to capitalize on its familiarity with RVers.”

Connors said the company changed its nameplate after two years in business because “we felt taking action to change our name to Dolphin Motor Coach would eliminate any potential confusion with our competitors.”

He added, “We’re a startup company, so there are going to be some missteps and things we can improve on. But we have a good foundation, and our team is top notch. From management on down, everyone is dedicated to what we’re doing. It’s a culture that is committed to quality, including an extensive PDI process. I’m very proud of that.”

Connors said that Dolphin Motor Coach is equally committed to being socially responsible and instilling a culture that promotes community outreach.

“Our company is committed to being the best we can be, and that means something special for our dealer and our end consumers. It also means giving back to our communities and helping to create a better world,” he said. “This is one of the reasons we were so honored to partner with the Clearwater, Fla., Marine Aquarium to be one of their corporate sponsors, as we help them achieve their core mission while coordinating events with the Make A Wish Foundation and Wounded Warriors. It’s exciting to be able to give back and help with the rescue, rehab and release of dolphins and other marine life, as well as benefiting children and veterans.”

Dolphin’s product lineup runs from the National Traveller, a “value proposition line” retailing for $99,000 to $119,000, and tops out with the luxury Dolphin series which carries an MSRP of $159,000 on up. Other lines include the CapeCod, Day Traveler, Honey, Marlin and ExecuJet.

“The National Traveller was a very key addition for us,” Connors said. “We are the only manufacturer building a high-end coach on that chassis, and it’s based on the top selling Class B floorplan in the European market. One thing that stands out is that we remove the top and replace it with a high profile roof that offers over seven feet of headroom in a Class B while also adding double cabinets and increased storage above the bulkhead. It creates a dramatic look, and enhances the aesthetics and appeal of the vehicle.”

The Day Traveler is a hybrid of a conversion van and a motorhome, according to Connors, designed “for that soccer mom, SUV buyer that is going to use the coach for day trips or short excursions.

“Our ExecuJet is also very unique,” he noted. “It offers the feel of a private jet and is perfect for entertaining clients or tailgating at sporting events. The Dolphin is loaded. We just offer a couple of options. It’s our flagship brand, targeting that high-end buyer that is coming into the market.”

“Again, our goal is to offer a full range of vehicles — not just one dimension — because Class B buyers are finding so many different ways to use the product. Class B sales sputtered along for years because the product just wasn’t that appealing, and maybe didn’t get the attention compared with some of the higher-volume markets. That’s changed in the last five or six years, and I really see this segment continuing to grow and capturing market share.”