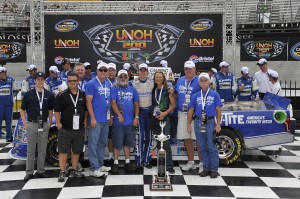 Cequent, a key supplier of towing and trailer products, and its premier brand Draw-Tite, have sponsored the BKR Team in the Camping World Truck Series since 2011.

“Cequent is the leader in aftermarket automotive products, which makes teaming up with Brad to sponsor the BKR team a natural fit,” said Tom Benson, president of Cequent Performance Products. “We are proud of the BKR team for the win last month in Bristol and for their continued success with Brad’s win in the Sprint Cup Series race in Chicago this past weekend.”

Draw-Tite employees and customers have shown their support at nearly every race in which the BKR Draw-Tite truck competes, including the Aug. 20 race in Bristol, Ind.