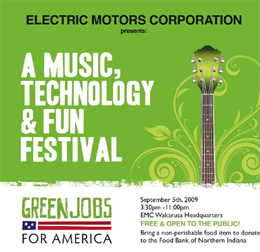 Electric Motors Corp. is sponsoring  “Green Jobs for America: An Entertainment and Education Exposition” Sept. 5 at its facility in Wakarusa, Ind.

The company will provide a sneak peak of the EMC Flash — the first ever American-made electric light duty pick-up truck.

EMC and its like-minded business partners want to inspire and educate the communities of Northern Indiana on the benefits of emerging “green” technologies and the jobs being created as a result, according to a news release announcing the event.

“With companies like Gulf Stream and EMC joining forces, we believe the ‘green’ technology movement is not only making headway worldwide, but more importantly, in Northern Indiana,” said Wil Cashen, EMC CEO. “Products like the EMC Flash are only one example of technology that is more efficient, cleaner and better for the future of the planet.”

The exposition will provide local “green” businesses with a unique opportunity to showcase electric vehicles, alternative energy, biofuels and other innovations from supporting industries.

Educational partners from Purdue University, Ivy Tech, Lake Michigan College and Apprentice Academy/Vincennes University will also be exhibiting the importance of “green” technologies and the future “green” endeavors of each school.

As an added bonus, the event will feature a performance by ‘The Byrds Celebration, featuring former Byrds front man Terry Jones Rogers. Famous for songs like “Turn, Turn, Turn” and “Mr. Tambourine Man,” The Byrds were an influential group of the late 1960s and early 1970s, and have remained an important part of music history for the past five decades. ‘The Byrds Celebration” continues The Byrds legacy and promises to be a special treat.

Emmy-award winning production company BCII will be filming the Green Jobs for America exposition. Footage from the event will be used to deliver the message of the need for “green” technology and the benefit of “green” jobs to a national audience.

“We hope that national exposure of BCII’s ‘green’ documentary will bring more attention to cause of ‘green’ job creation,” Cashen added. “We want this community of dedicated partners to continue to grow on both a local and national level.”